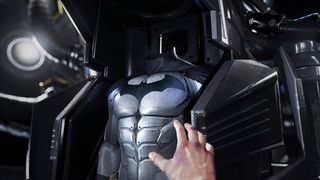 Sony is sitting pretty when it comes to PlayStation VR, having recently sold over a million units since its launch last year, but now one of headset's biggest titles is branching out.

Batman: Arkham VR will no longer be an exclusive as it heads to the HTC Vive and Oculus Rift on April 25.

Originally released in October 2016 for the PS4, Batman: Arkham VR puts players behind the cowl of none other than Gotham's Dark Knight to fight crime once more.

Unlike the previous AAA blockbuster entries in the Arkham series, Rocksteady Studios takes a more bite-sized approach with Arkham VR, utilizing the headset and motion controls to emulate the superhero's iconic actions, such as firing off a grapnel gun and slinging Batarangs.

Rocksteady was light on other details, including a price or any word on added features, leading us to believe the game will likely retain the same cost and functionality as the PS4 edition.

That said, we still keep our fingers crossed that Batman: Arkham VR's transition to a new platform goes smoothly, if not only because things did not go over too well the last time an Arkham game came to PC.