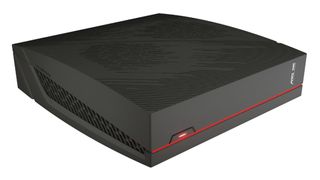 The Asus VivoPC X, which is a compact console-like PC designed to blend nicely into a living room environment while being powerful enough to tackle VR gaming, is now on sale over in the US for $799 (around £625, AU$1,055).

And, for those who wish to use the machine to get started with virtual reality gaming, both Amazon and Newegg are offering a bundle of the PC along with an Oculus Rift plus Touch controllers priced at $1,299 (around £1,020, AU$1,720), which is a hundred bucks cheaper than you’d otherwise pay for these separately.

The VivoPC X, which has arrived a little later than expected – at CES Asus said it would be out in March – packs plenty of power in a 5-liter case, with an Intel Core i5-7300HQ (Kaby Lake) processor alongside a VR-capable GeForce GTX 1060 graphics card, backed up by 8GB of DDR4 system memory.

Interestingly, Asus originally intended for storage options to include a 512GB M.2 SATA SSD, alongside up to a 2TB spinning disk, but the base model (A80CJ-DS51) of the final product actually comes with just a simple, 1TB hard drive. As Anandtech notes, the PC vendor apparently had to make this move to hit its intended price tag.

Dropping the SSD will obviously hurt a little when it comes to booting and loading speeds, but shouldn’t affect things too much in terms of raw gaming performance (although do note the hard drive is a 5,400 rpm model, not a faster 7,200 rpm disk).

As for connectivity, again there’s plenty packed into the small case. You get 802.11ac Wi-Fi, Bluetooth 4.1, a Gigabit Ethernet port, a pair of HDMI 2.0b ports and a DisplayPort. There are six USB ports on board, four of which are USB 3.0, and the remainder are USB 2.0.

Hopefully we’ll see the VivoPC X around the western world before long. Surely a VR-ready PC the size of an Xbox would be a welcome addition to living rooms on any continent.