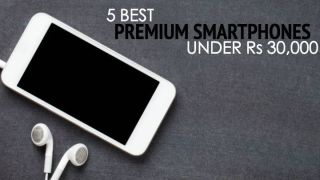 The definition of a premium, or a 'flagship' smartphone is slowly and steadily undergoing a monumental change.

A few years ago, smartphones in the under Rs 30,000 price range only consisted of mid-range devices with middling specs and poor cameras or previous generation flagships which had seen a price cut.

All this changed with the introduction of the OnePlus One. While there were few smartphones before the OnePlus One that tried to offer a flagship like experience at an affordable cost, what cannot be denied is that the OnePlus One ushered in the era of 'affordable flagships' (or flagship killers as some people like to call them) making way for the likes of the Xiaomi Mi5, the LeEco Le Max and many many more.

These days, one can get a smartphone for under Rs 30,000 that can easily rival and challenge the iPhones and Samsung Galaxy S series of the world.

Here are the 5 best smartphones under Rs 30,000 that deliver a premium and flagship level experience:

OnePlus has truly gone all out with the OnePlus 3, packing Snapdragon's most powerful processor - the 820, 6GB of RAM, a 3,000 mAh battery and 64GB internal storage.

Additionaly, the OnePlus 3 packs a 5.5-inch full HD 'Optic' AMOLED display, runs on Oxygen OS running atop Android Marshmallow and on the imaging side, features a 16MP rear camera with a Sony PDAF sensor and a 8MP front camera.

Realizing its mistakes, the company has packed NFC and QuickCharging (Dash Charge, in OnePlus speak), both of which were missing in the OnePlus 2, in the One Plus 3. Basically, we have everything and the kitchen sink packed in a gorgeous and svelte chassis.

Until the launch of the OnePlus 3, the Xiaomi Mi 5 was considered the best handset in its price range. However, even today the Mi 5 is an extremely competent smartphone and is worth the buy.

The Xiaomi Mi 5 comes with a 16MP rear camera, with optical image stabilization and a 4MP wide-angle front camera. On the software front, the device runs on Xiaomi’s own MIUI 7 running atop Android 6.0 Marshmallow.

Asus recently unveiled the Zenfone 3 in India and it is a comprehensive refresh over the old Zenfone 2.

The device supports 4G LTE, Bluetooth 4.1, Wi-Fi 802.11 ac, GPS/A-GPS and comes with a USB Type C port for charging and data transfer. The Zenfone 3 will be available on leading e-commerce websites starting August 17 and is priced at Rs 21,999.

The lack of a headphone jack though might be a deal breaker for some.

The Huawei Honor 7 comes with an octa-core processor, a choice between 16GB and 64GB of storage and 3GB of RAM, for just Rs 22,999, with a fingerprint scanner and 20-megapixel camera sweetening the deal even further.

The handset packs a 5.2-inch fullHD IPS NEO LCD screen with a pixel density of 423 ppi along with a 3,100mAh battery, expandable storage (up-to 128GB) and a 2.2GHz octa-core Hisilicon Kirin 935 processor.

On the imaging front, the smartphone comes with a 20MP rear camera with a scratch-resistant sapphire lens, phase detection autofocus and a dual LED flash and a 8MP secondary camera with a single LED flash.