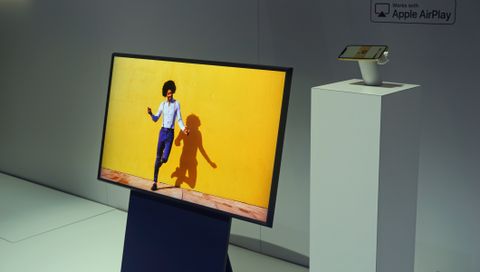 As a conceptual and cultural piece, the Samsung Sero TV is incredibly intriguing. The ability to have a TV that rotates automatically to match the orientation of your content is something any TikTok-user will appreciate. That said, cinephiles may be more attracted to traditional QLED screens that focus a bit more on substance over style.

At CES 2020, a show dedicated to the future of technology, the Samsung Sero TV – a new 4K QLED TV from Samsung that connects to your phone and rotates automatically to match the orientation of your screen – fits right in.

It’s being labeled as the TV for Generation Z, or anyone who spends as much time watching videos on Instagram, TikTok and other social media sites as they do watching streaming services or traditional cable.

It might not be able to hold a candle to the Samsung Q950TS, the company’s new 8K flagship with deep-learning AI upscaling – but hey, if you need a TV to binge on social media or mobile games, this is the one to go for.

The Sero is only being sold in a single, 47-inch screen size, at least for the time being. In Korea the Sero is priced at 1.89m KRW, which works out to around $1,600 / £1,230 / AU$2,300. Samsung representatives confirmed that the TV will be available in both the US and UK; while an Australian release is uncertain we were told more news could be coming later.

In its vertical orientation, the Sero basically looks like an oversized smartphone mounted to a plastic easel. That’s because the screen doesn’t reach to the bottom of the base, leaving just a few inches of the base uncovered.

Connections are located on the back of the base and the stand keeps the cables neat and tidy. This feels like an evolution of the stands Samsung has been working on for years and has now perfected with the stylish Sero.

Between the front display and the back panel that houses the connections is a simple motor that controls rotation – which, in theory, mirrors the orientation of whatever smartphone you have connected. Rotate your phone 90 degrees and the Sero will do the same.

When asked how many times the TV could be rotated in this way, Samsung didn’t have an immediate number… which is a bit worrying for a TV that’s only gimmick is rotating. (For comparison, the rollable LG OLED TV is good for 50,000 unfurlings.)

According to Samsung, the Sero TV is compatible with any smartphone – including those made by its biggest competitor, Apple – though the TV won’t automatically rotate if you’re on iOS and will instead need to be rotated via the remote or Samsung SmartThings app.

The good news is that, despite not being focused on cinematic content, the Sero is still a QLED 4K TV – meaning that, in terms of color saturation and brightness, it has all the ingredients it needs to be a decently powered mid-range set.

The bad news is that, without the AI upscaling chips found in other QLED TVs, it’s not quite as good as similarly sized QLED models in Samsung’s stable.

As a conceptual and cultural piece, the Samsung Sero TV is incredibly interesting. It’s a relic of the internet era, and one that will have a certain appeal to anyone who uses their phone more than their TV.

To that end, optimists might say that the Sero could be the bridge that gaps the divide for a younger generation that watches less and less traditional TV while pessimists, very rightly, might just call it a passing fad.