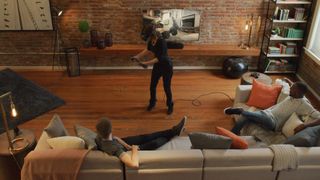 When it comes to the battle for VR headsets to go mainstream, virtual reality has traditionally faced a number of barriers and criticisms. Those include complaints about the cost of the equipment – although we’ve definitely witnessed progress in terms of the hardware becoming more affordable in recent times – and concerns about the quality of the experience (although more sophisticated headsets have emerged, too).

But however much progress is made in pushing forward with the technical capabilities of VR headsets, while producing more wallet-friendly models at the lower-end, there remains a major thorn in the side of virtual reality gaming: content, or perhaps we should say compelling content.

Specifically, the lack of a killer game to persuade people to think: I’ve gotta have that, so okay, I’ll finally splash the cash on a headset. And with Valve announcing Half-Life: Alyx, a prequel that slots in before Half-Life 2, which is due to be released in March 2020, we now have that killer title.

Don’t get us wrong, some VR games have made an impact already. Beat Saber is without doubt cool and fun, and it has certainly struck a high enough profile – but this, Alyx, is the 100% real deal. It’s an ‘AAA’ title built from the ground-up for VR (more on that in a moment) with a full 15-hour campaign built on the back of the return of a behemoth shooter franchise.

This is the ‘wait, is this really happening?’ moment that everyone who wants VR to succeed has been waiting for. We don’t think it’s any exaggeration to say that this represents a potentially defining moment in the history of PC gaming. But at the same time, it’s a big gamble for Valve.

What if a Half-Life game flops (perish the thought) because of what Valve has done here? And more to the point, if Alyx doesn’t succeed, what does that mean for the future of VR gaming? Can we declare it dead in the water? Because if a much awaited new Half-Life outing doesn’t work to persuade folks to invest in a headset, will anything?

No, we’d argue – it probably won’t. VR may as well give up the ghost, and indeed the specter, wraith, phantom, and any other incorporeal spirit you might care to name.

This is a bold gamble for Valve, and if it’s a bust when the cards go down on the table, what other game developer is going to follow in those footsteps of developing a VR-only ‘AAA’ big-name game from scratch? How long might it be for the world of VR to get another shot like this at making a widespread impact with mainstream consumers?

A very long time, we might suggest – if ever, even? – which is what we mean about the future of VR gaming possibly being at stake here. However, before we get carried away with any speculative doomsaying, we should probably take something else into account.

It very much looks like Valve is making every effort not to fail here, and it has carefully thought things through…

No dice for mice

It’s well worth checking out the above 20-minute YouTube video of Geoff Keighley’s interview with developers at Valve, which casts further light on what Half-Life: Alyx is all about, and what it aims to achieve, beyond what we’ve already heard with the initial announcement of the game.

There are some major revelations in the clip, including that Alyx is designed from the ground-up for VR, so it can really impress upon gamers what virtual reality can provide in terms of a fully immersive experience.

It’s also made clear that Half-Life: Alyx won’t cater at all for traditional mouse-and-keyboard gamers on the PC. Why not? Because you simply can’t perform the range of functions available in the VR game using traditional peripherals.

Interacting with doors is highlighted as an example, with the player able to pry open a door just a crack, providing enough space to throw a grenade through, and then quickly shutting the door afterwards. That sort of scenario isn’t really replicable with traditional gaming peripherals, without having to allocate a whole bank of door-related keys in clunky fashion.

Furthermore, the developers note that they didn’t want to take a middle road whereby they watered down the virtual reality mechanics to ensure they could also produce a mouse-and-keyboard version of the game for those without VR headsets.

In other words, this is a no-compromise VR game, with an interface and mechanics built specifically for virtual reality, to the point that there is no room for adapting Alyx for traditional gaming. That really shows how serious Valve is pushing with virtual reality here, and the announcement trailer we saw underlines this (and looks pretty amazing, frankly; if you haven’t yet seen the clip, it’s a must-watch).

As well as the core game mechanics, the other area Valve has been very careful with is support. Half-Life: Alyx isn’t just designed for the company’s own sophisticated – albeit expensive – Valve Index headset, but a broad swathe of hardware, including HTC Vive, Oculus Rift (and Oculus Quest with PC via the Oculus Link cable), not to mention Windows Mixed Reality headsets.

Half-Life: Alyx works with all types of setups – full room-scale, standing, or sitting – using different types of movement methods and controllers, as Valve explains here. In other words, this is another push for the broadest appeal, and again shows the thought behind how this game might best work (and drive the adoption of virtual reality).

Three is a tricky number

Interestingly, as you might’ve noticed, in the above interview, the developers are somewhat cautious about not overselling Alyx (“maybe we’re all really wrong and it’s terrible” is an admittedly tongue-in-cheek comment made near the end). Arguably this is because the game doesn’t really need any selling beyond what we’ve seen already, anyway, but perhaps also because Valve knows what’s at stake here – so maybe wants to play things down a little initially.

And maybe, also, the company is bearing in mind, at least in some small measure, the danger of avoiding any further inflammation of those non-headset owning gamers who might be a bit miffed at a new Half-Life game which they can’t play.

This is quite possibly part of the reason why Half-Life: Alyx wasn’t Half-Life 3. As the developers observe, making Half-Life 3 would have been too daunting a prospect, with far too much weight and expectation attached to it – and arguably there’s already enough riding on this game without all that added baggage. Plus HL3 would have been a distraction from getting the core VR mechanics right.

Furthermore, as it is, the more anti-VR types out there can look at this, and perhaps be a bit peeved as noted, but can always brush it off as: “Oh, it’s a standalone VR game, I’ll leave it thanks.” Whereas if this was Half-Life 3, we’d be looking more along the lines of (with the language toned down): “What the hell, HL3 finally comes out and I can’t damn well play without being forced to buy a VR headset,” probably followed by a great deal of rage-induced keyboard mashing…

Still, if Alyx is a success, and Valve’s testing of the VR waters goes well, maybe we will then see Half-Life 3 – in virtual reality (obviously that’s wild, or indeed positively feral, speculation – but Valve is priming us to expect more going forward, if Alyx is well-received).

So on the one hand, next year we’ll potentially have a big upsurge of VR headset sales and virtual reality hitting the mainstream in a major way, with more big-name VR games rolling in later – and maybe even Half-Life 3 waiting in the wings to join them? And on the other hand, it’s arguably a case of RIP Alyx with VR gaming going down the pan (leaving business and social use to potentially shoulder the entire future of virtual reality).

The latter stance is an extreme view? Maybe. But in all honesty, we don’t really see that scenario emerging, because even though it’s too early to judge – obviously – we’ve just got this gut feeling that Half-Life: Alyx is not going to fail. If nothing else, Keighley’s comments on Twitter certainly point to exciting times ahead…

I’ve played through HL: Alyx (it took me over 15 hours) and seen it in multiple stages of development. This is a full-blown Half-Life experience, with a rich, vibrant world, immersive combat, great storytelling, and innovative game design. pic.twitter.com/FLKtXusyQcNovember 21, 2019