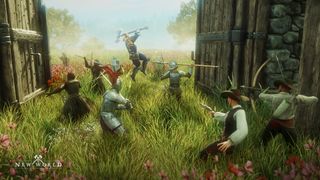 Amazon has scheduled its MMORPG New World release date for early 2020, and that just means you'll soon be able to warp back in time to the 17th century.

The cinematic trailer for the MMO game was revealed at The Game Awards and, according to the Amazon trailer, the official release window will be May 2020.

New World will take players back to a time when there was still much to explore and focuses on an island called Aeternum, or the Eternal Isle. There players will get to do their own share of exploring.

Being an MMORPG, players won't be alone. And, that appears to be a very important part of the puzzle. Based on our experience in the New World Alpha, most of the gameplay is centered on how players interact with each other. There weren't scripted events or a guided narrative.

New World is an open world sandbox. Players will band together, collect resources, craft equipment, and build fortresses. Other players can go it alone. But, the game is PvPvE, so loners and players in different factions are likely to run into one another on not-so-friendly terms as they vie for the same resources.

Those interactions between the players looks to be where the meat of the game will take place. As with Minecraft and Eve, players will be making their own fun within the world that Amazon has built. Though the monsters roaming Aeternum will likely add some extra dynamics to the game.

The combat we've seen in the alpha version was Dark Souls-esque, with stamina factoring into each fight. That may make it simpler than other MMORPGs that are loaded with fantastical abilities (though there are magical abilities). That combat can take place at a massive scale, too, as Amazon has said 100 players can take part in the same battle.

Amazon will also launch a New Worlds beta before the official release date, and the full game is available for pre-order now. You can find out more about New World on its website here.