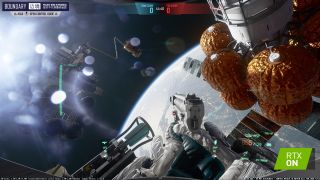 As part of GTC 2019, Nvidia’s GPU Technology Conference, six fresh PC games have been revealed which will support ray tracing.

The most high-profile effort being the battle royale Ring of Elysium, which is already out and will benefit from ray tracing via an update (although exactly when it might arrive wasn’t mentioned).

Ring of Elysium is a freebie battle royale from Tencent Games which has been a bit up-and-down in terms of reaction and reviews, but it has certainly proved popular enough, and offers an interesting take on the genre – plus of course it’s free to give it a spin. Ray-traced graphics will doubtless add an extra bit of temptation to take the plunge here…

Convallaria is another battle royale, and it’s set to launch next year, promising to combine fast-paced shooter and action game elements for 100+ players in open world dungeons (with PvE as well as PvP action, by all accounts).

Also out in 2020, Boundary is a zero-gravity shooter with the idea being to implement a realistic recreation of outer space, and doubtless that realism will be helped by the addition of ray tracing for the visuals (pictured top of this article).

F.I.S.T is described as a gritty and hardcore Metroidvania-style game set in a dieselpunk world starring a rabbit with a giant mechanical fist (which looks highly novel if nothing else). It should be out next year as well.

Xuan-Yuan Sword VII is another instalment in a long-running Chinese RPG series. Finally, Project X (which is just a codename) is an action shooter from Mihoyo (an anime game developer), although this one isn’t due until 2021 anyway.

Nvidia mentions that “several of these titles will also be coming to North America and Europe”, which presumably means that several of them won’t – but it didn’t clarify anything further about exactly which games might not make their way across from Asia.

Also at GTC, Nvidia took the time to show off some fresh footage of ray tracing in Minecraft (check it out above). The capability will be coming to Minecraft ‘soon’ in 2020, Nvidia noted, so presumably that means early on.