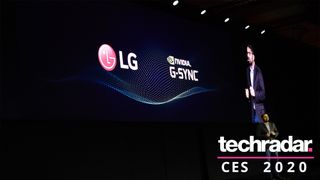 At CES 2020, LG is bringing a wealth of new TVs to market, but one of the most unique aspects of the announcement is the introduction of Nvidia's G-Sync technology to its TV lineup.

Basically this technology synchronizes the TV's refresh rate with the frame rate of your PC game or device. The only problem? You need an Nvidia GPU to make it work. We get that there's a certain subset of PC users that like to connect their PCs to a TV in the living room to play games rather than getting one of the best gaming monitors, but we have to wonder how big that user base actually is.

In fact, when we sit down and think about the people that are going to playing video games on a TV in the living room, we imagine the vast majority of them are playing on Xbox One X or PS4 Pro, and will be followed by the PS5 and Xbox Series X when they launch at the end of the year. And, in case you've forgotten, all of those consoles use AMD graphics.

So, if LG wanted to appease the widest possible base of users, you'd think the South Korean tech firm would instead opt for AMD's FreeSync, as it's been confirmed that next-generation game consoles will work with that technology.

Don't get us wrong, though: having G-Sync on a TV does have its uses. Alienware and HP have both released their own massive 55-inch gaming displays with the technology, and it does help systems that can't quite keep up with a 4K 60Hz display produce smooth gameplay. However, those are displays that are marketed primarily towards PC gamers, rather than the mass market that LG is looking for.

What makes this decision even more baffling is that there is already a huge amount of Freesync displays that are compatible with G-Sync, so LG could have easily gone that route. But, by going with Nvidia's licensed technology instead, LG has limited the potential userbase of this feature, and we think that's a mistake.