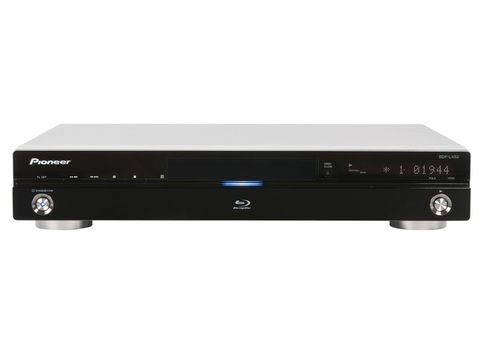 Typically brilliant performance from Pioneer, although not the knockout feature set we expected at this price

And this isn't a deck you can slip discreetly into your AV stand, either, as its unapologetically chunky frame demands attention.

Looking at the rear panel, the biggest surprise is the lack of multichannel analogue outputs, usually a staple of Pioneer's Blu-ray decks. But that's no problem if you've got an HDMI-equipped amp.

BD Live should be easy to access, and, sadly, the wired Ethernet connection found here doesn't fulfil that brief. Wi-fi is the way forward, and we're hoping Pioneer will add it to its next generation of players.

You do, however, get 1GB of built-in memory, with the option to add more by plugging a flash drive into the USB port on the back. But you can't use this port to play back digital media, a feature Pioneer usually prides itself on.

The only way to do so is to burn files to CD or DVD, but thankfully the list of supported formats is a long one, taking in DivX, MP3, WMA, JPEG and AVCHD.

Owners of compatible Pioneer receivers can also take advantage of Precision Quartz Lock System (PQLS), which reduces jitter when playing back music over the HDMI connection by synchronising the digital clocks of both components. The LX52 enables you to use this function with multichannel LPCM as well as stereo, which is a first.

This is definitely an enthusiast's deck and that's reflected in the moody blacks and stylish onscreen graphics. The setup menu is packed with options that experienced users will love, including detailed user-defined tweaks that can be saved in three memory positions.

Despite this attention to detail, the LX52 remains generally easy to use, thanks to the excellent menu structure and immaculately arranged remote.

The Quick Start mode fires up the deck in eight seconds, but when loading Blu-ray discs, the LX52 shows no signs of improvement over previous models, taking a lumbering one minute and 10 seconds to load Java-heavy platters.

Picture quality is nothing short of sensational. The LX52 conjures up some of the sharpest and most substantial hi-def images we've seen from a player at this price point. Blacks are profound, while colours dazzle with a combination of strength and accuracy.

But it's with detail that the deck really works its magic. Viewed side by side with most of its rivals (except perhaps the Oppo BDP-831), there seems to be an extra degree of crispness and punch to fine textures and patterns, and edges look just a touch more definitive.

Add fluid motion tracking and jaggie-free diagonal lines into the mix and you've got yourself one seriously good picture performer.

The LX52 tackles audio with equal relish. HD audio tracks piped to an amp as LPCM are virtually indistinguishable from the bitstream, boasting equal levels of dynamism and detail, while music on CD is smooth and natural sounding.

So, grumbles aside about the lack of Wi-Fi and slow loading times; we think the LX52 is an exceptionally talented Blu-ray deck.