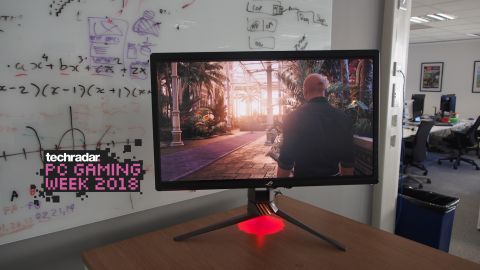 The Asus ROG Swift PG27UQ is a phenomenal gaming monitor, thanks to the Nvidia G-Sync HDR technology inside it, but its high price tag will put people off.

The Asus ROG Swift PG27UQ is one of the best gaming monitors because it’s heralding a new age of panels. It combines the high refresh rates of Nvidia’s G-Sync tech with 4K resolution and HDR (high dynamic range) support for exceptional image quality.

As part of TechRadar's PC Gaming Week 2018, we spent more time with the Asus ROG Swift PG27UQ, which promises to be one of the best gaming monitors ever made.

You get HDR 10 support and DCI-P3 color gamut for vivid colors, a high 144Hz refresh rate for smooth gameplay, and an ultra-high-resolution of 3,840 x 2,160. If you have a gaming rig that can keep up – and it’ll have to be beefy – then the Asus ROG Swift PG27UQ is a very impressive monitor indeed.

The Asus ROG Swift PG27UQ is available now for $1,999 (£2,299, around AU$4,000), which, quite frankly, is a huge amount of cash for a gaming monitor. It’s going to cost more than most 4K gaming monitors, but don’t forget you’re getting Nvidia G-Sync, 144Hz refresh rates and HDR, a combination of tech that very few monitors currently boast.

Its closest competitor is the similarly-specced Acer Predator X27, will be £2,199 (around $3,000, AU$4,000), so that extra money for the ROG is mainly for the design and build quality that Asus is known for.

However, at this price the ROG Swift PG27UQ is a monitor that will only interest enthusiasts and pro gamers that are willing to spend that amount of money.

The Asus ROG Swift PG27UQ has an eye-catching look that we’ve come to expect from Asus’ ROG (Republic of Gamers) brand. If you really like the aesthetics of Asus' ROG line, then the extra money this monitor costs, compared to the more straight-laced Acer Predator X27 may be worth the money.

The 27-inch screen is a good size for a gaming monitor, and with its standard widescreen aspect ratio of 16:9 this is a monitor that’s large enough to immerse you, but doesn’t dominate your desk as larger gaming monitors do.

A medium-sized bezel runs around the screen, and at the bottom is the ROG logo. On the back of the screen’s body is a larger, glowing ROG logo, alongside patterns that are reminiscent of circuit boards.

That glowing ROG logo can be controlled by the Asus Aura Sync software, so it can compliment other ROG devices with AURA lighting. It certainly echoes the design elements of other ROG gadgets, so if you have some already then the Asus ROG Swift PG27UQ will fit right in.

The stand is also eye-catching, with a blade-like design that feels sturdy, and an LED light that points down towards the desk. When you first turn on the  Asus ROG Swift PG27UQ, an onscreen menu will take you through the process of configuring the lighting.

It features an LED backlight that's dynamically controlled across 384 zones, which provides impressive contrast between light and dark scenes. It also has quantum-dot technology, and a DCI-P3 color gamut, which offers up a 25% wider color range compared to sRGB monitors, which means the monitor can display much more accurate colors.

It’s the combination of high resolution, high refresh rate, low latency and HDR support that will make the Asus ROG Swift PG27UQ really stand out from its competition, and helps to somewhat justify its incredibly high price tag.

We've now had more time to play with the Asus ROG Swift PG27UQ, and we remain very impressed by its performance.

Playing Destiny 2, which features lots of bight colors and dark locations, the G-Sync technology certainly puts in a lot of work, resulting in some really impressive visuals to go along with the 4K resolution – it matches, and often exceeds, many 4K HDR TVs we’ve seen.

The 144Hz refresh rate also worked wonders, making the game feel snappy and responsive, and there wasn’t a hint of screen tearing. We also played Hitman in 4K and in HDR, and the sunny locations of the assassination simulator really benefit from HDR in particular. With HDR set to 'on' in the game's menu, the Asus ROG Swift PG27UQ automatically switched to HDR mode when the game started, and turned itself off when the game exited.

It's worth pointing out that even with a very powerful PC (with a Nvidia Titan Xp graphics card), the strain of displaying 4K resolutions at such high refresh rates is still evident. Before putting down so much money for the Asus ROG Swift PG27UQ, you should make sure you have a rig that will be able to keep up. For many people, that will involve spending even more money.

The Asus ROG Swift PG27UQ also makes a fine productivity monitor, with Windows 10 scaling very well to 4K. Due to its 27-inch size, we found scaling the desktop to 120% meant it was still comfortable to work on (without text and icons being too small), while also offering more desktop space.

The wider DCI-P3 color gamut also makes this an excellent monitor for photo and video editing, thanks to its ability to accurately reproduce colors. This can help justify the price tag if you're looking for a monitor to work on as well as game on (though you'll probably want to switch off the colored LED lights when in an office).

The screen uses an IPS (In Plane Switching) panel, which offers excellent viewing angles, allowing you to view the screen from various angles without the color quality being affected.

The response time of 4ms (Gray to Gray) isn't the fastest, but the Asus ROG Swift PG27UQ still feels very responsive, with no noticeable lag. Playing games at 4K with HDR on and G-Sync technology providing high refresh rates really is something special. If you want the very best gaming graphical experience, then this monitor will be a worthy investment.

There are also a number of settings that you can activate using the onscreen menu. There is a joystick button to navigate the menus around the back, along with four buttons for opening various parts of the menu system. It's easy to use, and some of the gaming-specific features, such as FPS counter and onscreen crosshairs for better accuracy are very welcome.

The Asus ROG Swift PG27UQ is one of the best gaming monitors on the market, thanks to its combination of 4K resolution and G-Sync HDR technology, which delivers astounding visual fidelity and high frame rates.

For any PC gamer who's looked on enviously as PS4 and Xbox One games get HDR support, while their platform remains overlooked, the fact that companies like Nvidia and Asus are pushing for HDR support will be welcome.

It's an incredibly forward-thinking monitor, and as an increasing number of PC games come out with 4K and HDR support, you'll be well prepared if you have the  Asus ROG Swift PG27UQ. It's an absolutely wonderful example of the potential of gaming on PC.

However, its forward thinking may turn some people off. First of all, all this impressive tech comes at a price, and at over $2,000, this is an incredibly expensive monitor. Also, 4K and HDR support still feels like it's in its infancy at the moment, with only a few games supporting it on PC. That will change, but for the moment it may mean you have an expensive monitor that you can't make use of all its features.

You will also need a very powerful machine to run it. If you don't have an Nivida 1080 Ti or higher, you really will struggle to hit 4K at 144 frames per second. And, of course, if you have an AMD card, you won't be able to make use of the G-Sync features.

Also, in an era where monitors are getting even larger (and wider thanks to 21:9 ultra-wide aspect ratios), the relatively sensible 27-inch screen size and 16:9 aspect ratio may be a disappointment. This tech will come to larger monitors in the future, but we dread to think what price tags they will have.

If you have the money - and the hardware - for the Asus ROG Swift PG27UQ, then you will be absolutely blown away by the image quality this monitor brings to your favorite PC games. For the rest of us, it remains a very exciting glimpse of what the future holds for gaming monitors.