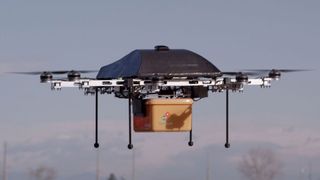 Domino's pizza could be the first thing that you have delivered to your house by drone, with the food giant taking on the likes of Amazon to be the first to move beyond the trial stage of unmanned deliveries.

Amazon has earmarked the UK as a great testing ground for its drone plans, with the UK Civil Aviation Authority telling TechRadar that it was hoping to learn from the trials.

However, Domino's has gone for a less populous nation, with New Zealand's Auckland seeing a pizza delivered on Thursday and the company now looking to launch a consumer service by the end of the year.

"Our enabling laws and regulation means we have the ideal environment," New Zealand Transport Minister Simon Bridges said after the Domino's test flight.

We're still at the stage where having deliveries arrive by drone feels like the stuff of science fiction, but it's looking increasingly like this is going to become a very big deal indeed over the coming years.

As Domino's chief executive puts it: "We've always said that it doesn't make sense to have a 2-tonne machine delivering a 2-kilogram order."