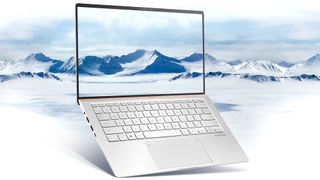 With IFA 2019 on the horizon, plenty of computer manufacturers are taking the opportunity to upgrade their popular products. Now, Asus has done just that with new versions of three of its ZenBook laptops, which will come with AMD mobile processors (CPUs).

Asus's ZenBook models are thin and light Ultrabooks with premium designs and the occasional high-end feature, like thin bezels, fingerprint scanners, or even special trackpads that have extra functions. But, for the most part, they've run on Intel processors.

Now, two ZenBook 14 models will get Ryzen mobile processor options and one ZenBook Flip 14 will as well. The configurations available are all quad-core CPUs, and will be either Ryzen 7 3700U or Ryzen 5 3500U CPUs. They also feature integrated Radeon Vega Graphics.

It's worth noting that even though these processors have the same naming scheme as Ryzen 3000-series, they use the older Zen+ architecture and not the new 7nm (nanometer) Zen 2 architecture.

These updates come at the same time as plenty of other manufacturers' product revisions. But, the upgrades that have stood out most in recent days have actually been for laptops with Intel insides.

HP refreshed its Pavilion gaming laptop and desktop with options for AMD processors. But, with the release of a series of Intel Comet Lake CPUs, the bigger news has been the machines that include the new hardware.

Dell put Intel Comet Lake processors into its XPS 13 and Inspiron devices, and MSI made the move to include Comet Lake chips in three new laptops. These are all machines that the Asus ZenBook models are likely to run up against in competition.

Asus may win some aspects of the competition, with incredibly thin screen bezels and a chic design. But, the six-core option available from Intel's Comet Lake processors will likely outperform the Ryzen options coming to the ZenBook line.

This will differentiate the computers for those that need sheer performance. The Ryzen processors may help Asus keep the price of the new ZenBook models lower than the competition, though. We don't currently have prices on the models, so we'll have to wait and see.