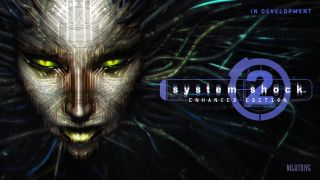 System Shock 2 is getting revamped with an enhanced edition by Nightdive Studios, as many PC gamers will doubtless be very pleased – or at least intrigued – to hear.

The overhauled take on this seriously spooky sci-fi shooter, which features one of the creepiest antagonists in PC gaming history – SHODAN, an unhinged rogue AI – is reportedly now in development and ‘coming soon’.

You asked for it and we are working on it... System Shock 2 Enhanced Edition coming soon!!! 💾#RetroGaming #SystemShock2 pic.twitter.com/vV5zBtUfWjAugust 12, 2019

Nightdive is currently working on a full remake of the first System Shock, which is pegged for a 2020 release (at least on Steam), and the studio has already produced an enhanced edition of this original outing.

This fresh take on System Shock 2 will seemingly run along similar lines to the latter, although it's not yet clear exactly what Nightdive is planning to change – aside from one element.

Fans on Twitter have already pointed out that there are already lots of community mods that considerably improve System Shock 2 gameplay and visuals. When prodded about exactly what would be different with Nightdive’s version, the CEO responded as follows:

That’s an interesting nugget of info, and certainly, there are folks out there who are hoping the co-op mode will get fixed up, so perhaps that’s one element of Nightdive’s plans here. Others see multiplayer as a lesser consideration, and indeed some argue that System Shock 2 is a game best experienced alone – at least on your first play through – as the solitude adds to the creepy atmosphere.

At any rate, that’s the only indication of what’s planned thus far, although further details will be imparted soon, the developer promises. Plenty of folks are clamoring for details on what platforms might be covered aside from Windows (whether Linux will be supported by the enhanced edition, for example) but we’ll just have to wait and see.

System Shock 2 was first released way back in 1999, and Nightdive’s announcement coincides with the 20th anniversary of the game.