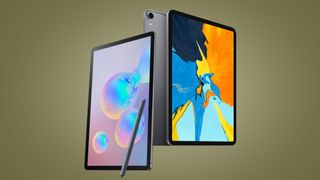 If you’re committed to the professional tablet life, there are only a few options - and topping that list is typically the iPad Pro (2018). But Samsung has been fighting for the tablet-as-work-machine market niche, and the Samsung Galaxy Tab S6 is its latest bid. Can it unseat the champion?

Both tablets have their advantages, and it’s safe to say this is the closest competition yet between the two device lines. Our prior guide compared the iPad Pro to the Samsung Galaxy Tab S4, but Samsung’s new tablet has several improvements on its direct predecessor.

While personal taste might be the deciding factor, we’ve walked through each aspect of the devices to give you a good sense of how they size up to each other. Note that we’ll be comparing the Tab S6 to the 11-inch model of the iPad Pro (2018), as it’s closest in size and appeal; the only thing different in the 12.9-inch iPad Pro is a larger screen (and resolution) and bigger battery.

Without further ado, here’s how both pro tablets stack up.

Of all categories, price might matter the most, and the Samsung Galaxy Tab S6 is cheaper by a notable margin. It starts at $649 (about £530, AU$940) for the base 6GB RAM/128GB storage model for its Wi-Fi only model, with a release date of September 6 in the US.

It’s unclear when, or if, it will come to other regions, aside from a UK date later in 2019. An LTE version is planned for US release sometime in 2019.

These tablets obey different schools of design, though they’re broadly similar: a no-button front screen with a front-facing camera hiding in the bezel rim, buttons on the side, and a rear-facing camera (or cameras) on a metal back. Sadly, neither have a 3.5mm headphone jack.

The iPad Pro has returned to the flat-sided, burnished metal look of the iPhone 4, which gives it an attractive industrial flair. Its four speakers on each corner of the device now have a woofer and a tweeter apiece. This was the generation that Apple moved the iPad Pro to USB-C, which is terrible for Lightning cord owners but great for everyone else.

The Samsung Galaxy Tab S6 has squared-off edges, too, but with a bit more roundedness for a less brutalist feel. It also has a microSD slot (which the iPad Pro doesn’t) for up to 1TB of storage, which is a leg up. Finally, the Tab S6 trimmed down to 5.7mm thick, which is just shy of the iPad Pro’s 5.8mm, putting them on even ground.

Camera-wise, the tablets are roughly comparable, with the iPad Pro’s 12MP main rear camera and 7MP selfie camera matched by the Tab S6’s 13MP main and 8MP front-facing lenses - though the latter has also added a 5MP ultrawide camera. While this offers unquestioned versatility over the iPad Pro, it also prompts the question: how much will you actually use your professional tablet for photos?

The Samsung Galaxy Tab S6 takes the crown here with its 10.5-inch Super AMOLED (1600 x 2560) display - but that was the same last time around, as the new tablet seemingly inherited the Tab S4’s screen unchanged.

Well, one change: it now has an in-screen fingerprint sensor, which is great for anyone who needs an alternative to facial recognition.

The iPad Pro’s 11-inch Liquid Retina IPS LCD (1668 x 2388) display is no slouch, with Apple’s TruTone tech and 120hz refresh rate helping smooth out media and gaming, But it can’t quite manage true HDR like an OLED screen can, offering expanded color range with its EDR (Extended Dynamic Range) but not the brightness.

While both tablets had been on more or less equal ground before, the Tab S6 might have pulled ahead with its revamped Book Cover Keyboard, for one big reason: touchpad. In addition, the keyboard can split off while leaving the back stand attached, which is helpful.

It’s unclear how pricey the new keyboard will be, though it will probably outpace the $149/£119/AU$189 sticker price of the Tab S4’s more limited Book Cover Keyboard. It might end up being pricier than the iPad Pro’s serviceable but not long-use-ready Smart Keyboard, which costs $179/£179/AU$269 for the 11-inch model.

The other advantage the Tab S6 holds is its S Pen, which not only comes included with the tablet (saving the $129/£119/AU$199 an Apple Pencil 2nd generation costs) - Samsung’s revamped stylus also has a few new tricks up its sleeve, like Air Actions that allow you to gesture like a conductor for simple controls. They don’t seem too useful thus far, but might, if apps make useful third-party interactions.

Both tablets recharge their respective styluses, with the Apple one magnetically clipping to the top of the iPad Pro and the Samsung S Pen slipping into a divot on the back of the Tab S6. The latter’s Book Cover and Book Cover Keyboard fold around the stylus and have a gate for easy access, which is a nice consideration to protect it from getting knocked off in transit.

While the iPad Pro likely outperforms with its A12X Bionic chip, the Tab S6’s Snapdragon 855 is a step up from its predecessor’s already-outdated processor. On the other hand, Apple’s professional tablet starts at 4GB RAM (upgradeable to 6GB), while Samsung’s begins at 6GB and can be upgraded to 8GB.

Storage-wise, the iPad Pro starts at a laughable 64GB but can be upgraded to 256GB, 512GB or even 1TB of space - even if it’ll cost you big to get there. The Tab S6 starts at 128GB and upgrades to 256GB, but its microSD slot expands storage up to 1TB.

Specs aside, the real differentiator is operating system. While Samsung’s Android 9 Pie, One UI setup hasn’t been particularly outstanding, its desktop-simulating DeX mode has been promising. It’s still no replacement for a real computer experience, but shortcut keys on the new Book Cover Keyboard make it easier than ever to swap into.

Apple’s enlarged-for-tablet iOS has traditionally been superior to other operating systems for larger devices, but the introduction of iPadOS later in 2019 could really set it apart. Expect features that take advantage of the screen real estate and distinguish it from phone operatin systems.

The iPad Pro’s 7,812mAh battery is bigger than the Tab S6’s 7,040mAh capacity, but size isn’t everything. In our previous test, we found the iPad guzzling battery far faster than Samsung’s tablet - though we’ll have to do additional testing to see what’s what.

That said, the iPad is a bit quicker to recharge, even with Samsung’s 15W fast charging.

These tablets are a bit too apples-and-oranges to make a definitive call either way - each has pros and cons that more or less balance out, but it’s probably the operating systems that clinch it for you either way. Are you an iOS/iPadOS person, or do you appreciate Android? Ecosystems matter.

If you’re cash-strapped, the Samsung Galaxy Tab S6 is a great pick - though, of course, you’re most of the way toward affording a decent laptop anyway for the Tab’s starting price. If you’re willing to spend out the nose for top performance, the iPad Pro is probably the better option - but if you’re buying it for a professional use (like photo editing or the like), there are probably apps you’re hunting for, such as the Adobe suite, that work on both.

In any case, either of these machines would be a decent choice for the hardcore tableteer.