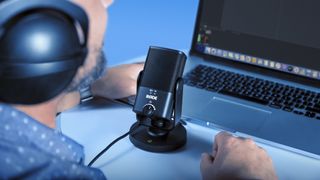 While the Blue Yeti USB microphone and its more compact Nano successor have been the go-to for many podcasters, Rode is hoping its latest NT-USB Mini will steal their thunder.

Priced at $99 (£99, AU$149), the NT-USB Mini costs the same as the Yeti Nano and offers much the same proposition – take a successful USB microphone and shrink it down, condensing controls and maintaining audio quality in the process.

The interface on this little Rode mic is incredibly minimal, with a single dial that adjusts headphone level found on the front, and a USB-C and 3.5mm headphone port found on the rear.

The desktop stand is weighted and is designed to absorb any shocks from a bumped desk. It’s attached magnetically to a 360-degree swivelling mount for the microphone, so you can quickly detach it and mount it on a mic stand or studio arm.

Outside of the company’s reputation for professional, studio-grade audio quality, one of Rode’s standout features is the simplicity in which its microphones interface with other gear. The NT-USB Mini is class-compliant, meaning it will work immediately with any computer or tablet when hooked up via USB, with no drivers, firmware or apps required.

The NT-USB Mini features an integrated pop filter and is constructed from “hard-wearing steel and reinforced nylon resin”, so it should be compact and rugged enough for grab-and-go situations.

The Rode NT-USB Mini is available now in the US for $99 with other region’s availability and pricing to follow.