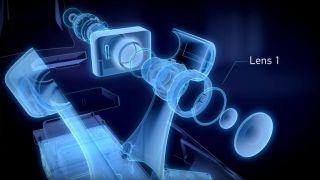 GoPro is no stranger to 360-degree video. Between its Omni six-camera setup and its own tech powering Google's ridiculous 16-lens Jump rig, GoPro likes to stay near the cutting edge of VR video.

However, the company may be looking to cut out the need for an arsenal of cameras to make 360-degree magic, using what appears to be a single two-lens system debuted while filming this year's MotoGP, as spotted by Engadget.

The device, built into the bike of pro racer Dakota Mamola, is described as the first-ever VR GoPro setup - creating an immersive video feed with just two 180-degree lenses, each hooked up to a HEROCast wireless transmitter.

It's no secret that GoPro has been vying for a VR product meant for the masses; the $5,000 (about £3,784/AU$6,583) pricetag for the Omni isn't exactly appropriate for the average consumer, after all.

That said, this isn't a confirmation of an entry-priced 360-degree GoPro. No formal announcement has been made yet - not to mention that the rig shown on the motorcycle appears somewhat on the experimental side.

Considering the company's struggling financial quarter last year - and the delay of its camera-equipped drone, Karma - GoPro could stand to shake things up and soon, but we'll just have to be patient before any concrete details of an entry-level VR device emerge.