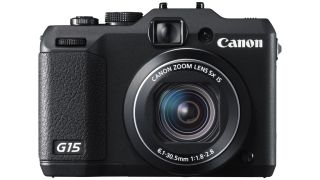 The Canon PowerShot G15 is a great high-end compact camera

Updated: Now with the latest Canon PowerShot models, listed by market price for UK, US and Australia.

The Canon PowerShot range features a wide selection of cameras that cover many different bases. High-end models with larger sensors sit alongside bulkier superzooms, but there're plenty of models to cater for more modest budgets too.

Whether you are looking for a mid-zoom range compact camera with manual controls or a more point-and-shoot minded AA-battery-powered option, the huge spectrum of PowerShot models has something for all. Here we run through each Canon PowerShot model's specifications to make it easy to see which is best for your needs.

The line-up of Canon PowerShot cameras stretches from cheap compacts that offer just the basics, right up to the revered G12 and G1 X that are well regarded as capable alternatives to a bulkier DSLR camera.

So which Canon PowerShot is best for you? Whether you've got a big wad or a modest gathering of cash to splash out, the following guide will help you find the best Canon PowerShot camera for your needs…

Canon PowerShot A4000 IS

If you're looking for a fuss-free family compact camera, then the Canon PowerShot A4000 IS's versatile 8x zoom range, good build quality and undemanding point-and-shoot operation are likely to impress. However, while Canon has delivered a reasonable set of features for the price, there are some sore points.

With its slow shot-to-shot rate and lacklustre continuous drive setting, the Canon PowerShot A4000 IS isn't well suited to photographing fast-moving families. Its battery life is below average at 175 shots, too. Ultimately, though, if you can live with some of its drawbacks, then you're getting a camera that's capable of taking excellent images in good light, and is extremely easy to carry around with you, making it a great value buy.

Read our Canon PowerShot A4000 IS review

If the budget PowerShot models aren't quite far-reaching enough then the lower-end mid-range SX150 IS is well equipped to cover all your needs. The PowerShot SX150 has a mid-range 12x zoom lens that covers a 28-336mm range and there's a 14.1-megapixel sensor at the camera's core.

A 720p HD movie mode sits alongside the stills options that include in-camera Creative filters such as Toy Camera and Miniature effects. Manual shooting modes or point-and-shoot ease are catered for, plus there are 32 Scene modes to cover every situation.

Sporting a 20x zoom lens offering an angle of view equivalent to a 25-500mm lens on a 35mm camera, the Canon PowerShot SX260 HS is well equipped for those who wish to travel light. A 12MP rear-illuminated CMOS sensor, image stabiliser system and Digic 5 image processor enables this camera to take great quality images, even in low light.

Full HD video can be recorded and output via the built-in HDMI interface and global positioning information can be recorded for sharing on image and video sharing websites. Advanced photographers will also appreciate the inclusion of manual exposure options, whereas a wide range of automatic shooting options are also included for those who are less technically inclined.

Canon's rough-and-ready PowerShot provides a good range of beginner-friendly photography features, as well as advanced camera technologies. Along with intuitive point-and-shoot modes, there's a selection of underwater shooting options to make aquatic photo capturing a stress-free experience. Some handling issues - both underwater and on dry land - take a bit of the shine off this camera's overall performance. But what this compact lacks in speed, it makes up for in image quality.

The build quality and ability of this camera to produce consistently well-exposed, detailed images can't be faulted, and additional features such as built-in GPS and Full HD video mode broaden the Canon D20's appeal. It's got a lot to offer, but if you're after an everyday rugged all-rounder, some similarly priced rivals may offer a more comprehensive package.

Although it has the same pixel count as the Canon SX40 HS that it replaces, the Canon Powershot SX50 HS makes a huge leap forward with its focal length range as it features a 50x zoom lens. This optic has a focal length equivalent to a 24-1200mm lens on a 35mm camera, with a maximum aperture of f/3.4-65.

As well as the ability to shoot in shutter priority, aperture priority and manual exposure mode the SX50 HS can record images in raw format, making it even more attractive to experienced photographers. Less experienced users are also catered for though as there is a host of automatic exposure modes as well as JPEG recording.

With plenty to appeal to beginners and more advanced enthusiasts alike, the Canon S110's inclusion of Wi-Fi connectivity adds to its potential attractiveness to tech-savvy photographers too, even if it is tricky to set up.

At first glance, the Canon G15 looks pretty similar to the Canon G12, but there are a few significant differences. The most notable of these is the stacked or overlapping mode dial and exposure compensation dials on the top, and a new f/1.8 lens with 5x zoom.

Canon has manufactured a high quality compact camera in the shape of the Canon G15. It is capable of producing great images with bags of detail, good punchy colours and pleasing shallow depth of field effects.

Although the zoom range is limited when compared to other Canon G-series cameras, the trump card of the Canon G1 X is its unusually large sensor. A larger sensor has more surface area to receive light, improving image quality at high sensitivities and boosting dynamic range. Interestingly, Canon has opted to stick with the 4:3 aspect ratio, rather than 3:2.

Canon has equipped the G1 X with the latest Digic 5 processor, which promises better control over noise at high ISO sensitivities, faster operation and smoother 1080p video recording. The 4x zoom lens provides an angle of view equivalent to a 28-122mm lens on a 35mm camera, and an array of direct controls should make manual operation a pleasure.