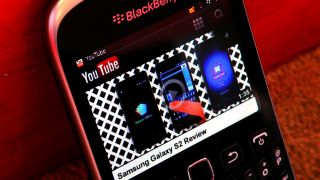 This could be bad news for anyone using a BlackBerry device which still runs the firm's BB OS7 platform - YouTube may have just pulled the plug on the OS.

BlackBerry fan-site CrackBerry is reporting that many BB OS 7 users are finding that YouTube videos no longer work on their devices while the new BlackBerry Z10 smartphone running the BB10 software is working fine.

Apparently handsets that are still chugging along on older versions of the BlackBerry OS (4, 5 and 6) are unaffected, which suggests this is a technical issue rather than YouTube pulling the plug.

So it may just be a glitch on YouTube's part which is causing the problem and a fix may well be on its way.

We have contacted BlackBerry and YouTube to see if this is just a temporary issue or if it really is Fin for the video sharing service on BB OS7.