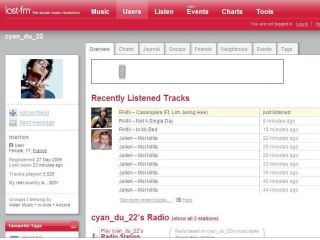 A good day for mobile music fans - as long as you're not holding any Apple shares.

Last.fm just announced the launch of an 'on the go' application for Android that enables pretty much of all its key functionality including genre-specific streaming radio stations, personalised streaming radio and up-to-date concert information.

Social features include the ability to track users' listening habits, share tracks with friends and stream other user's stations.

A new feature for Android - and not one you'll find on the one-app-at-a-time iPhone - is Background Playback, which enables you to continue to listen to Last.fm's streaming music while accessing other programs such as email.

T-Mobile also announced today that the G1 phone will be available from all T-Mobile stores across the USA as of tomorrow - it was originally sold in just 3G markets and online.

Nok nok, who's there?

In other travelling tune news, Nokia revealed that it had already sold over 1 million units of the XpressMusic 5800 ('Tube') touchphone, which has just gone on sale in the UK.

Nokia says that the 8GB handset sold out within hours of going on sale in Hong Kong and Moscow, and had 'over 150' Brits queuing up at Nokia's flagship Regent Street shop.

However, there was still no news on when - or even whether - the XpressMusic 5800 will eventually be available as a 'Comes With Music' version, as previously planned.