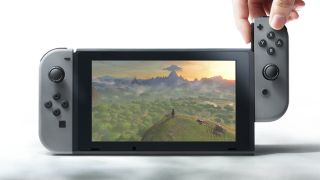 A new report claims the Nintendo Switch console is expected to launch in the UK with prices starting from £199.99.

The report comes from LetsPlayVideoGames, which claims to have heard from two reliable sources that UK retailer Game has been told it can expect to sell the console from £199.99 when it launches in March 2017.

The Nintendo Switch's Price will apparently start at £199.99, and according to these sources there will be a second model with greater storage capacity and a game included, priced at £249.99.

It’s not clear yet exactly how much better the storage will be on this premium model or what game will be included alongside it, although The Legend of Zelda: Breath of the Wild seems like a safe bet to us.

How much? It depends on the model

The report also revealed that the Switch Pro controllers are expected to sell for £39.99.

It’s important to note that these prices aren’t recommended retail prices from Nintendo itself as the company doesn’t set RRPs for consoles in the UK. However, it gives us a relatively solid idea of what the console’s launch price will be in the UK.

While this is just the price point for one UK retailer, Nintendo is apparently planning for pricing to be “close to direct conversion price comparable across regions” as part of its push to make the console region-free.

So is this a reasonable launch price for the Nintendo Switch? We’re inclined to think so. Sensibly, this price is in line with current prices for the Xbox One and non-Pro PS4, which are now having their mid-cycle refresh.

It might be less powerful than those other consoles, but given its handheld features and the undeniable pulling power of Nintendo’s exclusive titles we imagine it will do fairly well at this launch price.