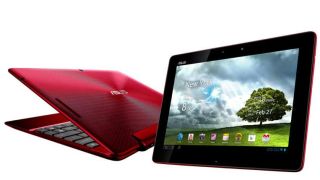 It may look like a netbook but it's a tablet, we swear

Asus has revealed the UK release date and pricing for the hip young Asus Transformer Pad 300.

Intended for the yoof, the Transformer Pad 300 will be heading to Currys and PC World online first, where you'll be able to order it in early May.

The Android 4.0 tablet will set you back £399, which puts it on a par with the 16GB Wi-Fi only new iPad 3 (try saying that three times drunk) but gives you twice the internal memory.

Not one to keep things simple, Asus is then sending the Asus Transformer Pad 300 to Currys and PC World bricks-and-mortar stores from late May, before giving it a general release in late June.

But that's not where the logistical fun ends! If you want the Asus Transformer Pad 300 in "Royal Blue" (blue), then you can get it in May. But if you'd prefer "Iceberg White" (white), you'll have to hang on until late June, and "Torch Red" (red) isn't coming until late July.

Like the older, more expensive Transformer Prime, the Transformer Pad 300 also has an optional dock with full QWERTY keyboard to essentially transform (see what they did there) the tablet into a netbook.