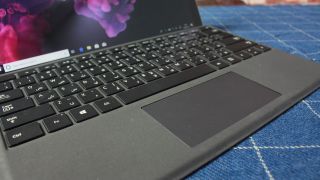 Microsoft’s Surface Pro hybrid could be getting a thinner keyboard – which by extension should hopefully be lighter, too – or at least a freshly uncovered patent points to this possibility.

The patent was published earlier in August and is for a ‘low-profile keyset’, meaning slimmer keys, and therefore a more svelte keyboard. It pertains to a generic ‘computing device’, although the main image accompanying the documentation looks very much like a Surface Pro (certainly going by the keyboard hinge).

Microsoft describes several methods of slimming down the keys compared to a traditional scissor switch design, with considerable mention of the possibility of using a metal alloy for the key dome or switch as this would be “advantageous in providing the appropriate tactile feedback to a user for a low-profile input device”.

The patent also talks about the key itself being metallic as this would be a further boon in terms of slimness, and the keycap could have a noise softening layer, which would be “particularly advantageous when the keycap is made of a metallic composition”.

Using a metal input key, the slimness of the key could reach less than 0.1mm, and that’s thinner than the measurements cited for an alternative material such as thermoplastic (which is also discussed in the document).

Of course, the average user isn’t likely to be bothered about the technical aspects behind the scenes, as long as the keyboard is thinner, while still maintaining a pleasant typing action. And of course the main challenge is managing to slim things down without losing that satisfying typing experience.

As ever with patents, the innovations discussed therein may simply be concepts Microsoft is currently considering, but they may never come to anything.

That said, making the Surface Pro thinner is likely a crucial consideration, and indeed Microsoft has already been thinking of ways to make the Type Cover trimmer, including directly integrating the trackpad into the keyboard’s circuit board.

Moreover, a slimmer Type Cover would be an important move because it obviously adds to portability, and makes the device seem more premium.

It’s not that the current version of the detachable keyboard (Type Cover) for the Surface Pro 6 is particularly thick – in fact it’s pretty trim already – but the overall device does feel a little hefty. And a trimmer keyboard could help take a little of the weight off, although we should note that it’s more a case of the hybrid having a robust, solid feel and build quality, rather than being chunky as such.

It’d also be good to work with the keyboard in terms of slimming down the hybrid, as that won’t affect the internal components in the actual tablet portion of the device, such as the battery (we don’t want less battery life, naturally).