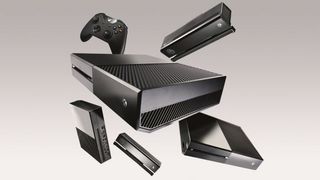 We don't know much about the specs of the Xbox Project Scarlett (now officially called Xbox Series X) yet, but we do know it'll be something of a powerhouse. Whether your television can keep up, though, is another matter entirely.

Microsoft has claimed the upcoming console will be four times as powerful as the Xbox One X, and is set to take the crown as the most jacked-up console when it launches in late 2020 alongside the PS5. Coming a full seven years after the release of the original Xbox One, the code-named Xbox Project Scarlett will offer a lot more than just a mid-cycle upgrade to the current console generation.

But some of its most future-facing capabilities will also be limited to those with televisions that can make the most of these upgraded consoles.

Many of these features – 4K, variable refresh rates, and the like – are already part of the Xbox One X's hardware. But we're going to be entering a console generation where even more titles are going to make use of these advanced settings, while other features are really going to push the boundaries of what's possible in modern gaming.

The biggest buzzword around both consoles and TVs at the moment is 4K, or Ultra HD resolution. 4K panels provide four times the pixel count of 1,920 x 1,080 HD screens, and offer a far more crisp and detailed picture than their low-res counterparts.

You're still getting the same game on an HD screen, of course, but those wanting to really up the immersion – or gain an advantage when playing competitively – will be wanting a 4K screen and 4K console output to match.

4K has been something of a red herring with this console generation, though. Even the PS4 Pro doesn't offer 'true 4K', or 'native 4K' – all it does it upscale the resolution on certain titles to give them an enhanced appearance.

There are a certain number of Xbox One X games able to output in native 4K, from blockbuster titles like Anthem and Battlefield V to smaller indie titles such as Bad North. (The likes of Borderlands 3, Gears 5, and Halo Infinite are all slated to play in native 4K when they launch too.)

Players increasingly expect games to output in 4K: otherwise what use was buying a 4K-ready console? And it's clear that Microsoft will be looking to make this even more routine for its game releases.

We know from a chatty Xbox Twitter account that Xbox Scarlett will also, however, be able to output in 8K, or around 33 million pixels (compared to 4K's eight million pixels), while Sony too has confirmed that the PS5 will be 8K-capable.

But there really aren't many 8K televisions around, and many players are still finding their way into the world of 4K gaming – not to mention developers, who won't have had the option of rendering games in 8K until now.

We may be looking at a further splintering the of the player base into HD, 4K and 8K gaming, making for an increasing disparity in the levels of visual quality available for one game. Playing Fortnite on an HD screen already gives you a disadvantage compared to those on a beefed-up 4K gaming monitor, and that's only likely to get worse.

Relatively few titles will be able to output in 8K at launch, if any – and likely saved for AAA franchises like Gears of War or Halo at first. What we saw with the Xbox One X was 4K 'updates' sometime after a game's launch, and it's likely we'll see a similar timeline.

Me, myself, and HDMI

The crucial piece of the puzzle here is HDMI 2.1: the new video transfer standard that will gradually replace the current HDMI 2.0 ports on most smart TVs.

HDMI 2.1 is necessary for inputting 8K video (at 60fps) to a television, so it seems certain that both the Xbox Scarlett and PS5 will have an HDMI 2.1 port.

There are relatively few TVs with an HDMI 2.1 port – generally just those with 8K displays – which means most people buying these next-gen consoles probably won't have access to their most impressive technological achievements.

You'll also need an HDMI 2.1 to get 4K games running at the superior 120 Hz / 120 fps frame rate – something Sony has promised for the PS5, and a benchmark we expect the Xbox Scarlett will match. Microsoft's tweet confirmed we'd be getting "4K at 60 fps, up to 120 fps", however, which is somewhat unclear over whether HD or 4K is getting the higher frame rate.

The new HDMI standard also supports the variable refresh rate (VRR) coming to Xbox Scarlett – possibly the PS5 too – which means that the visual information shown onscreen can vary the number of frames shown per second.

If your console is locked at 60fps, and a busy scene in a game drops that frame rate to 50fps, you end up with stuttering and tearing (when the screen isn't refreshing at the same rate of the source input). VRR should allow for more fluid action that allows your TV and console to be more in sync.

While the console wars are, as ever, leading Microsoft and Sony to try to outdo each other on specifications, it's important to remember that your television is going to decide which of these new features you can actually utilize.

8K TVs with HDMI 2.1 ports are still pretty rare, with the first few commercial sets having come out in the past few months. There will certainly be more on the market by the time the PS5 and Xbox Scarlett land in late 2020, but if you're thinking of buying a new television before then, you may want to consider one that can unlock these consoles' true potential.

It will be an investment that gives more returns the longer the console is on the market, with more 8K-ready titles and demanding games that will make use of the higher frame rates and VRR able to be shown on your television.

And if a top-tier television feels out of your reach, be assured that you're still getting a premium console experience, and these next-gen consoles should make even HD gaming look and feel better than ever.