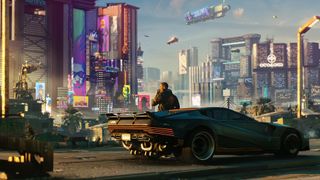 The highly anticipated sci-fi video game, Cyberpunk 2077, will be getting its own spin-off card game named Afterlife sometime in 2020.

As reported by GameSpot, the Witcher III developer has collaborated with board game publisher Cmon, which has put out tie-in titles for properties such as Bloodborne, with a board game for God of War on the way too.

With the mainline Cyberpunk 2077 titles set to release in April of next year on PS4, Xbox One and PC, it's likely the card game will come in the weeks or months after launch – in order to ride the massive wave of publicity the massive RPG game will likely set off.

What is this card game about?

We've been speculating for a while now about the possible games developer CD Projekt could be working on, with one interview for Bankier leading many to believe an additional three Cyberpunk titles were on their way.

A card game certainly seemed likely, with The Witcher III's card-based mini-game Gwent getting its own standalone game. Afterlife will be somewhat different in being a physical card game, though we wouldn't rule out a digital mini-game in Cyberpunk 2077 or a standalone digital title – and possibly even physical version of Gwent getting published through Cmon as well.

Cmon's listing for Afterlife reads: "The game thrusts players into the dark alleyways of Night City, where ruthless gangs clash with corporations in an endless war for money, power, and control."

"In Cyberpunk 2077: Afterlife, players become Fixers, the data brokers and masterminds in Night City that recruit cyberpunks, equip them with gear, and send them out on missions. But nothing's free in Night City. Players need to balance between what they want and what they can actually afford. Using an innovative drafting mechanic and special dashboard, players must decide which cards they want to buy, and which to sacrifice for funds in order to purchase new ones."

"Each successful mission raises the player's Street Cred, with mission survivors becoming Veterans, imparting their knowledge and experience to newer recruits. In this chrome-infused world, Street Cred is the only currency that truly matters."

What we really want is to play the mainline game already, but the collaboration – alongside the new prequel board game, Cyberpunk Red – shows the confidence CD Projekt RED already has with its massively ambitious title.