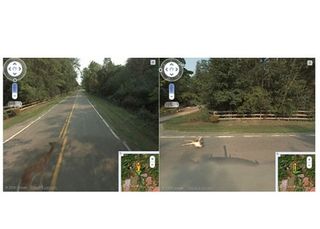 Google's Street View car has been spotted around the streets of London for some time now. Its all-seeing eye – the big, conspicuous camera atop the vehicle – taking in the sights for future reference.

While we wait with bated breath in the UK for the arrival of Street View, it seems that Google's street-based venture is causing all sorts of problems in the US, especially when it comes to wildlife.

The Guardian has just posted point-of-view images of a Google Street View car hitting a baby dear. The car was cruising on Five Points Road near Rush, New York, when the accident happened.

The images were hosted on Google Maps until some eagle-eyed user spotted the incident and told anyone on the internet who cared to listen. Once Google got wind of what happened, it promptly removed the footage.

Not an uncommon occurrence

Google issued a statement about the incident (no, they honestly did), saying: "The driver was understandably upset, and promptly stopped to alert the local police and the Street View team at Google.

"The deer was able to move and had left the area by the time the police arrived. The police explained to our driver that, sadly, this was not an uncommon occurrence in the region – the New York State Department of Transportation estimates that 60,000-70,000 deer collisions happen per year in New York alone – and no police report needed to be filed."

Street View was set up by Google in 2007 to allow users to view parts of some regions of the world at ground level. Now those same users have some semblance of what it feels like to hit a deer.

Somehow, we don't think this will become a future Google Labs app.