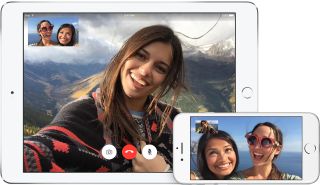 Sending text messages to your relatives is nice, but a video call gets you much closer to the feeling of actually being in the same room as them.

Apps for phones and tablets let you make video calls just as easily as a phoning someone, and as long as you have a decent mobile internet or Wi-Fi signal they're just as reliable.

But what are the best apps for keeping in contact with your relatives? That depends on your priorities. Is ease of use paramount? Or privacy? Or streams that won't decimate your data allowance? Let's take a look at what's on offer.

If you have relatives who aren't too tech-savvy but own, an iPad or iPhone, FaceTime is probably the best video app to use. It’s very simple, and comes preinstalled on Apple hardware.

Using FaceTime feels much like making a normal call, removing the need for any setup or tweaking of settings. There is one issue, though: you can only use FaceTime with Apple hardware – and you can’t bridge the gap with any third-party apps if you're an Android user.

So if you, or they, don’t own a MacBook, an iPad or an iPhone, you’re out of luck. There's an extra treat for those with an iPhone X, iPhone XS or iPhone XS Max, though – those phones let you use Animoji and Memoji, which replace your face with cute animated avatars.

The original video and audio chat master, Skype can feel like the opposite of FaceTime. You need to install this app yourself, and set up an account or use a Microsoft login, but when you are ready to go it works across just about every platform.

It can be used on Android phones, iPhone, tablets, laptops, desktops including Linux ones, Xbox One consoles, iPod touches and even Windows 10 phones. Does a relative own an old Android phone? It needs to have Android OS 6.0 Marshmallow or newer, as the older version of Skype with support for earlier phones has been discontinued.

Skype-to-Skype video and audio calls are free. You just need to get a subscription or some credit if you want to make calls to mobile or landline numbers.

Google hasn’t stuck to a single method for video chat. You can use either Hangouts or Duo, which seems (and is) a little confusing.

For the simplest interface, try out Duo. Open up the app and you’ll see your face through the front camera, and a scrollable list of your Google contacts. Select one and Duo will start a video call.

Much like FaceTime, Duo is clean and easy – but unlike Apple's platform you can use it on any phone.

If you use WhatsApp, it’s probably as an alternative to text messaging, or to send mountains of pictures and animated GIFs without paying anything. However, it also offers encrypted video calls.

All you have to do is press the video camera icon at the top of the screen in any WhatsApp message page, and this will start a video call – it's as simple as that.

You can also add more people to your video call, turning it into a video group chat. Up to four people can take part in the same chat.

WhatsApp is also a top pick if you want to use less data – and video calling can use an awful lot of it. Head to the Data and Storage Usage section of WhatsApp’s settings menu and you’ll see a Low Data Usage checkbox – tick this and the app will consume much less of your allowance when connected over mobile internet rather than Wi-Fi.

Signal is widely regarded as one of the most secure and private messaging apps. This is largely thanks to a security protocol developed by Signal co-founder Moxie Marlinspike – it’s so good other apps, including WhatsApp, have adopted it.

So is WhatsApp just as good as Signal in privacy terms? No. Signal doesn't harvest metadata in the same manner as WhatsApp, which boils down to a record of the people you contact, and when.

If you or your family are concerned about privacy then Signal is the best messaging app to use at present.

Originally Signal was quite a basic app, with security at the fore, but it added video calls in 2017.

More than two billion people use Facebook, so there’s a good chance that quite a few of your relatives do too.

To start a video call, just look for the video camera button in any messenger screen, whether that’s on a web browser or in the Facebook Messenger app. This is one of the simplest video chat solutions, particularly if some of your relatives aren’t the most tech-savvy folks, and they don’t own an iPad or iPhone.

Facebook is also suitable for video chat among large groups – up to 50 people can join the same chat, so you could hold a huge family gathering at Christmas on Facebook if you wanted, although it could turn into a rather chaotic affair.