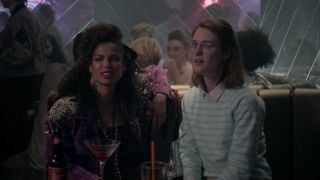 The 10 best Black Mirror episodes, as chosen by TechRadar

Black Mirror has had quite the journey over the past few years. Once the mainstay of Channel 4 in the UK, and now a global Netflix phenomenon, the hit sci-fi series offers a dark and twisted reflection of society today – most often in its relationship to technology.

While many of the technologies used in the series are commonplace – cameras, VR headsets, social media – Black Mirror manages to bend them towards fears we didn't know how to articulate, often moving into full-blown psychological horror.

Some episodes are more fantastical than others – and some are just about Miley Cyrus – but there's no denying the impact Black Mirror has had on the wider conversation around technology in our lives. As our homes fill with voice assistants and smart speakers, and virtual worlds become more engaging than the real one, Black Mirror is one of those shows that simply becomes more relevant as time goes on, often in highly unnerving ways.

With Season 5 of Black Mirror recently having released on Netflix – and Black Mirror Season 6 looking likely – we've gone through the back catalogue to bring you this curated list of the 10 best Black Mirror episodes across all the seasons so far.

Season 2's Be Right Back is a brilliantly haunting episode of television, with Domhnall Gleeson (About Time) playing the AI recreation of Hayley Atwell's (Agent Carter) deceased boyfriend. In a world where our messaging apps and online activity track countless snippets of our voices, habits, and personalities, Be Right Back asks what we would do with that data if we had the choice.

This iconic episode takes the top spot for its slow-burning suspense, and the way it boldly takes its premise to its natural conclusion. Stunning performances from both lead actors – and a gut-wrenching conclusion – helps too.

With AI voice assistants getting smarter – and more human – than ever, it's an episode that seems more prescient every passing day.

Few episodes can compete with San Junipero (Season 3). This 80s-infused coming of age tale came as a huge surprise to those used to Black Mirror's usual dour outlook, with the flashing neon, heaving nightclubs and Californian sun making for an episode that felt like no other.

San Junipero asks how real our virtual identities are, with an uplifting story of finding love and happiness in the digital world, though naturally at a cost. As the first Black Mirror episode centered on a queer romance, too, it still manages to feel timely years later. Starring Gugu Mbatha-Raw and Mackenzie Davis.

3. The Entire History of You

Jesse Armstrong's screenplay takes us through a deeply personal marital conflict that feels both classically tragic and uncannily futuristic – and stars an early-career Jodie Whittaker, before she took on the mantle of Doctor Who. One for the history books.

John Hamm (Mad Men, Baby Driver) stars in this typically unnerving Black Mirror episode (a Christmas special), in an isolated cabin where two men reveal their dark pasts to each other – but why exactly are they doing it?

Looking at themes of surveillance, pickup culture, and taking the concept of 'blocking' someone on social media to its natural (and horrifying) conclusion, this isn't quite one for Christmas morning – but who are we to judge your family traditions?

Hang the DJ (Season 4) offers a curious spin on the modern dating show, where every relationship is given a time limit based on the projected compatibility of the couple. But can an algorithm really calculate love?

Naturally, things aren't that simple, but the chemistry (or lack of) of the onscreen parties makes for one of the most touching and heartwarming Black Mirror episodes ever.

With a screenplay co-written by Parks and Recreation's Rashida Jones, and The Good Place creator Michael Shur, Nosedive was one of the strongest Black Mirror episodes of Season 3.

It takes place in a world where social media 'likes' and star ratings have become the most important social currency we have, where your followers and shares literally decide the kind of home you can live in, job you can have, and the kind of company you can keep. Anyone with an Uber rating under 4.2, this is an episode to give you nightmares.

The opening episode of Season 5, Striking Vipers is a confident exploration of fidelity, male friendship, and the way identities shift and change in digital spaces – looking at what happens when a VR fighting game in the vein of Street Fighter or Tekken gets too realistic for its own good. (Oh, and there's some great fight sequences too.)

Starring Anthony Mackie – that's 'The Falcon' for you Marvel fans – as well as Pom Klementieff, who plays Mantis in the Guardians of the Galaxy films, there's some real blockbuster talent on offer.

Striking Vipers ultimately decides to sidestep the more difficult questions around straight and queer sexuality – disappointing given the bold San Junipero – but there's still plenty here to keep you thinking.

You couldn't have this list without Black Mirror: Bandersnatch, an interactive choose-your-own-adventure movie that let viewers choose the direction of the story.

It follows young programmer Stefan (played by Dunkirk's Fionn Whitehead), who attempts to turn a cult novel called Bandersnatch into a video game that lets players choose the direction of the story. Seeing a pattern here?

While not being a perfect experiment – it can be quite a jumbled experience, and leans on some lazy mental illness tropes – it's still wildly inventive, and manages to feel distinctly like Black Mirror. It was enough of a success to make Netflix want to produce a lot more interactive television, and you'll have Bandersnatch to thank.

Another Season 3 gem, Men Against Fire follows a soldier whose certainty in the war he's fighting – against monstrous enemies called "roaches" – starts to slip.

There's a real video-game feel to the action, with more than a small influence from the first Gears of War game – and a stunningly disturbing emotional journey, given real weight by Malachi Kirby (Roots, Curfew). It's hard to talk about this one without giving too much away, but trust us: it's worth a watch.

The very first episode of Black Mirror, 2011's The National Anthem launched the series into the public eye with a bleak satire about bombastic media headlines and the political circus that gets caught up in it.

Rory Kinnear – who you may know as Bill Tanner from the recent James Bond films – takes the role of the sitting Prime Minister as a princess kidnapping scandal rocks the country, with a very specific ransom being asked for the victim's safe return. And yes, this episode came out long before #PigGate (somehow).