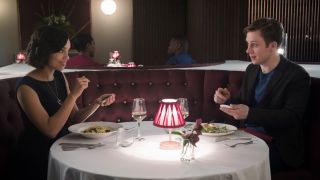 With the latest season of Black Mirror now behind us, many of you may be asking – as we are – when Black Mirror Season 6 is going to hit our screens.

While there's been no official announcement about Black Mirror Season 6, it's now one of Netflix's hottest properties, alongside the likes of Orange is the New Black or Stranger Things.

We didn't get quite as much in the most recent season as usual: with a shorter run of three episodes each at an hour long. But there's no sign of Black Mirror stopping there, with showrunners Charlie Brooker and Annabel Jones pointing to plenty of potential for the long-running sci-fi anthology series.

In an interview with Digital Spy, Charlie Brooker suggested Black Mirror was "pretty flexible" in the kind of tone and format it worked with, adding that "I don't think there's anything to stop us... we could do one-offs, we could do an ongoing story, we could do spin-offs."

And why stop now? With the show's profile bigger than ever, and Netflix distributing the show to an ever-larger global audience, we fully expect to see Black Mirror Season 6 in the very near future.

Black Mirror was first conceived by screenwriter, producer, and journalist Charlie Brooker, who was behind previous shows such as horror drama Dead Set, and hosted mocking news programmes such as Newswipe and Screenwipe. He has written or co-written all but one episode in the series' history – going back to 2011, when it began its life on Channel 4 – and serves as showrunner alongside Annabel Jones, who also executive produces the series.

Black Mirror was envisaged in the vein of anthology shows like The Twilight Zone, with distinct, episode-contained stories tackling our society's often-problematic relationship to technology – exploring the dark side of social media, virtual reality, and even the afterlife in a sleek, bleak package.

In a Guardian column back in 2011, Brooker wrote that "The 'black mirror' of the title is the one you'll find on every wall, on every desk, in the palm of every hand: the cold, shiny screen of a TV, a monitor, a smartphone."

When will we see another season of Black Mirror? The past few seasons have only had around a year between them, so we'd be surprised if the next load of episodes didn't land sometime in 2020.

New seasons traditionally launch near the end of the year, close to Christmas – though Season 5 did buck the trend with a June release. (Don't those bleak winter months suit Black Mirror best?)

Holiday 2020 seems likely, but it would be just like Black Mirror to catch us by surprise.

The sci-fi show tends to be somewhat restrained about its episodes, tending towards an impactful few rather than countless hours to binge.

That said, the move to Netflix did see Black Mirror up its episode count to six per season – though Season 5 dropped that back to only three episodes, which may have had something to do with how much production time the interactive Bandersnatch movie took up (see below). We imagine the head honchos at Netflix will want to up the number for the next season if possible.

Black Mirror: Bandersnatch was an incredible experiment for the series – and for Netflix. Instead of a linear story, Bandersnatch put you, the viewer, in the driver's seat, making crucial – and not so crucial – decisions throughout the narrative. You could zip through the story by hitting a dead end early on, or spend hours getting lost down a rabbit hole of looping plot threads.

Unsurprisingly, it took a lot of work. Speaking to Hollywood Reporter, co-creator Charlie Brooker saying that "It’s definitely something I would do again and I think there are lots of ways to tackle it. The biggest challenge is narratively. It would have to justify being interactive otherwise, why put yourself through that?”

So, another interactive episode could happen, especially given Netflix now has the programming infrastructure for it – which it's putting to use for other shows like Bear Grylls: You vs Wild, or even Unbreakable Kimmy Schmidt.

However, we imagine it may be a smaller endeavour the next time around.

Black Mirror has come a long away in terms of high-profile stars. While its first episodes had plenty of talent – including Daniel Kaluuya, who would later star in Jordan Peel's comedy-horror Get Out – the latest seasons have seen some huge names appear, including the likes of Brian Wong (The Martian) and John Hamm (Mad Men).

Season 5 managed to net not only Anthony Mackie (MCU's The Falcon) and Pom Klementieff (Guardians of the Galaxy 2), but also international pop star Miley Cyrus, who played... an international pop star. The second episode also starred Andrew Scott – who you may know as Moriarty from BBC's Sherlock, or the hot priest from Fleabag Season 2 – alongside Topher Grace (That 70s Show) as a social media platform CEO.

Without an official season announcement, it's hard to get a sense of the potential talent in the next season, but you can be sure you'll recognise some of the faces.

Where can I watch Black Mirror season 6?

Since Netflix bought the rights to Black Mirror back in 2015, new seasons have all debuted and streamed exclusively through the Netflix platform.

If you're watching killer bee drones, virtual reality simulations, or giant holograms of Miley Cyrus on your TV screen, you're going to want the best picture formats to do it.

Black Mirror has been filmed in 4K resolution ever since Netflix picked up the show in 2015, with Seasons 3 onwards getting much sharper detail than the previous seasons on Channel 4.

Seasons 4 and 5 were also filmed in HDR (high dynamic range), meaning that anyone with an HDR-compatible TV will be able to enjoy increased contrast and more vivid colors. 4K TVs that support the premium Dolby Vision HDR format will get an even better picture, with dynamic metadata that tailors the display settings the visuals you get in each scene – but even standard HDR TVs will offer something special for you.