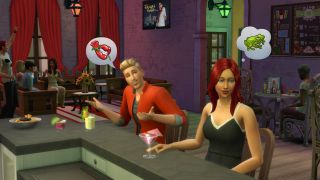 Editor’s note: Gerri Lawlor sadly passed away in 2019. This article has been published with the blessing of Gerri’s mother and hopefully will serve as a tribute to the most wonderfully kind, eccentric and talented woman this writer has ever had the pleasure to interview.

If you consider the most recognizable fictional languages in existence, there’s quite a few that immediately come to mind. Klingon, Elvish, Dothraki; fully-fledged tongues which have been carefully crafted and learned by those dedicated enough to do so. But it’s not just television, film and books that have developed these fictional languages, to a lesser-so extent we’ve seen them crop up in gaming with the likes of Skyrim and Zelda. But no gaming language has become as big of a series trademark as Simlish.

The moment you hear the likes of “benzi chibna looble bazebni gweb,” it’s hard not to imagine floating green plumbobs, kitchen fires and the maniacal removal of swimming pool ladders. And while you may be forgiven for thinking there’s a method to the bizarreness of Simlish, in reality, its creation was about as madcap as you would expect.

Birth of a language

Following the release of Maxis’ Sim Ant in 1991, enigmatic game developer and studio founder Will Wright set his sights on a new project. Inspired by a book on urban design, titled A Pattern Language, Wright wanted to create a ‘digital dollhouse’ which would allow players to dabble in architecture, creating their own homes where the environment would have an effect on the inhabitant’s mood.

However, the concept was poorly received in a focus group, resulting in the game becoming a backburner project for Wright, known as “Project X”, which he worked on while developing SimCity 2000 and SimCopter. Animators worked on the game in a separate office from Maxis’ famous Walnut Creek and, as the project began to take shape, more staff joined Wright’s passion project and began to weigh in creatively. This is what ultimately resulted in the turning point that changed what we know to be The Sims from an architecture sim into a life simulation, as designer Roxy Wolosenko suggested Wright consider the characters built into his sim rather than just the objects.

It’s from this point that work began on creating the Sims themselves. Who were the creatures living in these buildings? How would they look and, most importantly, how did they sound?

From the beginning, Wright knew that these simulated characters needed their own language. This language needed to be totally new while also having universal appeal, but he didn’t know exactly what he was looking for. Alongside producer/game designer Claire Curtin, the hunt began for the unspecified language, and for the performers who would pull it off.

After attending a stage show in San Francisco, Claire Curtin’s husband suggested one of the show’s performers as a potential voice over artist for his wife’s project. The performer in question was seasoned improv artist Stephen Kearin, who was well-known for pulling off a range of vocal sound effects.

Curtin called Kearin into Maxis and explained the quest to find this universal language. In addition, the team was searching for a female counterpart to work alongside Kearin. At Kearin’s suggestion, fellow improv performer and actress Gerri Lawlor was brought onboard.

All fun and games

With the two main performers chosen, the experimental stage began to find what would eventually become known as Simlish. It was a grueling process that saw Lawlor and Kearin try pretty much every possibility under the sun: underwater talk, ancient dialect, backwards speaking, to name just a few.

“The day that I got there, it was a day of great frustration,” Kearin tells me. “They were just huffing and puffing and walking around. I remember Will Wright doing a lot of that behind the glass. Claire sat just on the other side of the glass with me and they were trying to merge Swahili and Cherokee. Trying to merge these two languages was an absolute mess, as you might imagine.”

Sensing the frustration of the team, Kearin suggested that they try a different approach altogether, instead utilizing Lawlor and Kerain’s improv skills.

“There's an old improv game that we used to play called Foreign Poet,” Kearin explains. “You would speak in a gibberish language and then the partner would interpret what you just said, even though what you were saying was completely made up and gibberish. That became a game. I asked whether it would be helpful at all. We were recording over existing animations or versions of the animations and so she said: 'Sure, it can't get any worse'.”

Kearin and Lawlor started trying this gibberish language over simple animations - of Sims sitting or saying they were hungry - letting their emotion drive the scene and the language itself falling secondary. It was the right fit and became what we know to be Simlish.

In my experience, speaking Simlish is actually easier than you may think. Maybe because I had the co-creator as a teacher. During my conversation with Lawlor, we tried the game for ourselves, with her making the sound of a bell every time she wanted me to shift from gibberish into English. While initially my own embarrassment crept into the way, once I turned my brain off, it became surprisingly enjoyable and almost understandable.

“All it is is just going: 'Ahh, ahhhaaa',” Lawlor enthuses after the lesson. “You can get away with so much Simlish just by using vocal noises.

While I may claim that my five minutes of speaking Simlish was easy, keeping up the level of improv energy for months of takes, for both the core games and expansions, took its toll on all involved.

“That was probably one of the most challenging aspects, having to fight in a sense boredom or repetition because we had so much to do,” Kearin explains.

That doesn’t mean the pair weren’t able to create their own fun, with Lawlor proudly admitting she was a nightmare for those responsible for editing.

“We would do special things just so that Will Wright would listen to some of the stuff and see what he liked and didn't. So we would sneak little phrases in specifically for Will Wright not in Simlish,” Lawlor proudly tells me. “It would be someone with a kitchen fire go: 'Oh dang, my kitchen on fire, Will Wright never came over for his chicken, I hate him... Ooh, here comes the fireman, I'm going to have sex with you. Damn you Will Wright, damn you to hell Will'.”

Both Kearin and Lawlor also ensured that their own stamps were permanently on the roots of Simlish, sneaking in their own code words that, over time, became canon Simlish.

“'Plok' was from Stephen and meant 'goddamnit it' or whatever,” Lawlor tells me. “But we had problems because when they said 'plok' it sounded like 'fuck'. But it's in it a lot. Whenever you see 'plok' it means ‘God’. Whenever you hear ‘nooboo’, that's 'baby'. ‘Wolfem’ is actually from my ex-boyfriend, because he used to call all his animals ‘wolfems’. I said I was going to use 'wiffens' and 'wolfems' in The Sims so that was my little nod to my ex.”

The Sims released in 2000, becoming one of the best-selling PC games of all time. And, for those who had spent months recording gibberish, its success was a major shock.

“I remember picking up Gerri at the train station and I asked if she heard this thing was really taking off and she's like: 'I know! I wonder how long this thing is going to last', Kearin tells me. “We were always very surprised because it just kept going and going and going and then they said it's the biggest game in the history of games.”

“With voice work, I've done a lot of things for charity and I've done things that are notable where you can recognize my face and that kind of thing but I had never gotten this, little girls actually crying when they met me and saying: 'Oh my god, you're the voice of The Sims' and I was like a star. That was weird for me.”

While Simlish wasn’t initially tracked as a language, both performers sneaking the same words in again and again meant that, as the series grew, certain words became tracked and Lawlor and Kearin found themselves reading scripts for a language they co-created out of improvisation.

“By the time we got to medieval Sims, we would have a sheet to pull from,” Kearin laments. “We'd pull from sheets, which became another skill you had to develop. Just sitting here and just ripping along is one thing, but going from a sheet and picking here and there and from take-to-take-to-take-to-take, it became surreal.”

Lawlor and Kearin stayed on for several years as voices of The Sims. However, over time, the number of performers grew and the roles began to change - with Lawlor taking on voice directing for later games.

However, the pair were eventually let go by EA. Something which, from speaking to both, remains a hurtful period in their careers.

Since his time on The Sims, Kearin has used his Simlish writing abilities to create further fictional languages, working on Supergirl to create the Martian language and starring in films such as Megamind and Monsters vs. Aliens.

“And also, knowing that people playing the game are improvising. For me, I look at it as improvisation, as this incredible sort of avenue of the art form. And it's funny, I never used to think about that but it's a big part of my relatively early years as a performer. To me, that's what it means to me working on the inside.”

Before passing, Lawlor enthused to me about the stage work she was still doing - much of it was involved her first love: improv. But what she seemed most proud of was her advocacy work - after two hours of speaking, she signed off by telling me that she was on her way to give homemade banana bread to the homeless people in her area. As Kearin told me, she was a real “livewire”.

While Lawlor is no longer with us, she leaves behind a legacy of work that transcends time as one of the most recognizable languages in a game, and yet remains an unsung hero in the world of video game voice-overs.

“If I can make somebody feel better about themselves every day, I can die tomorrow a happy person,” Lawlor told me. “I don't need a lot of fame, a lot of money; as long as I've made somebody happy and made their day better, it's like a whistle chain. It grows.”