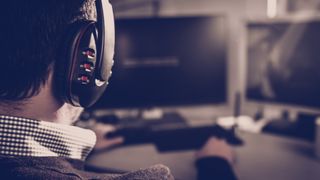 We think that 2019 was a year of quiet surprises in PC gaming, with outsider indie hits like Disco Elysium and Outer Wilds sweeping many of the accolades while big-budget series sat on the backburner.

But the roster of PC games coming out in 2020 suggests it’ll be a year of dormant franchises rising again (some in unexpected VR form), polished sequels, and a long-awaited release of one of the most anticipated RPGs of the last five years.

So, 2020 is set to be more of a blockbuster year than 2019, with plenty of love for the golden oldies. We’ve rounded up the 10 most anticipated upcoming PC games of 2020 here.

Make sure you also check out our pick of the best PC games that are out now.

Announced back before The Witcher 3 launched to become an instant classic, Cyberpunk 2077 has been a long time coming. Polish studio CD Projekt’s latest creation couldn’t look more different to its Witcher series however, set as it is in a metallic neon-lit city of the future.

You play as V, a cybernetically enhanced mercenary left for dead by persons unknown and guided by none other than a hologram of Keanu Reeves to find your assailants.

Night City is a sprawling metropolis filled with deviants, crime and opportunity. It looks set to be the most densely populated open-world city ever made, offering unbounded freedom in how you choose to navigate it.

There’s a growing number of games that are finally tapping into the potential of VR, but the technology has lacked a true system-selling title until now. This Half-life prequel, set just before the events of the second game, may not be Half-life 3, but for VR it could prove just as seminal.

Half-life: Alyx is no tech demo either. It’ll be a full 15-hour story-led shooter, set in and around the iconic City 17 - the communist-style city run by the tyrannical intergalactic species known as the Combine. Oh, and it will have gravity gloves, which is quite possibly the most exciting videogame weapon reveal since Half-life 2’s gravity gun.

We don’t know much about Elden Ring yet, but what little we do know - that it’s a dark fantasy action-RPG written by George R.R. Martin, developed by From Software, and headed by Dark Souls mastermind Hidetaka Miyazaki - is enough to shoot it straight to the top of our ‘Most Wanted’ list for 2020.

There are other trickles of info that tickle our excitement sensors too. It will be From Software’s first true open-world game, filled with dark imagery and a tasteful fusion of eastern and western fantasy imagery based on what we’ve seen in the trailer. A bringing-together of a couple of this century’s greatest fantasy creators that’s likely to maintain From’s penchant for ruthlessly challenging the player.

Shortly after the Resident Evil 2 remake came out and wooed us with its mix of nostalgic throwback and decidedly modern level design, this gets announced. The original Resident Evil 3 was famously more action-packed than its predecessor, as you blasted your way through zombie-infested Raccoon City while fleeing the trudging, persistent threat that was Nemesis.

With the Resident Evil 3 remake, expect zombie mayhem mixing suspense with B-movie silliness, an intriguing new multiplayer mode, and an ‘untethered’ Nemesis, who will stalk you through large chunks of the game as you try to prevent zombies from nibbling the tendons out of your ankles. It’s not likely to be as momentous as its predecessor, but a continuation down the polished path the series has been on in recent years. This makes it one of our most anticipated PC games of 2020.

Like its predecessor, Crusader Kings III lets you play a noble of various standing in an accurate recreation of the medieval world – be that a devious Duke in southern England, a Viking raider looking to establish a holding, or the head of a sweeping Islamic caliphate.

It’s an intricate game of politics, backstabbing and power-grabbing, and it’ll be fascinating to see it expanded and improved in a modern engine.

2016’s Doom reimagining was the best thing to have happened to the hell-slaying shooter series since, well, the original Doom itself. It managed to recall the pace and ferocity of the original games by introducing brilliant new mechanics; from the vicious glory kills which granted you health, to the jump pads that sent you uppercutting into cacodemons.

Doom Eternal is building on these new foundations, adding things like grappling hooks capable of skewering demons, the Super Shotgun returning from Doom 2, and improved multiplayer.

It’ll be a rip-tearing romp across Mars, the moon of Phobos, and to hell and back.

Today’s young gamers may associate RPGs with Skyrim and The Witcher, but it was Baldur’s Gate that really set the bar for just how deep and sprawling such a game could be. It was a masterclass of storytelling, as you gathered a party of big personalities who’d clash and converse with each other, and attempt to rope you in on their own adventures.

Baldur’s Gate 3 is being developed by Larian Studios, the bunch behind the excellent Divinity: Original Sin games. The studio will need to reel in its whimsical leanings for the darker world of Baldur’s Gate, but Divinity’s great combat and co-op systems should blend brilliantly into this legendary saga.

One of the most technically flawed but brilliant RPGs ever released on PC is getting a sequel. Taking place in a modern-day Seattle - albeit populated by vampires, werewolves and other nocturnal creatures - Bloodlines 2 casts you as a human who was recently turned into a vampire.

The type of vampire you choose to play will drastically affect your experience as you prowl the streets of Seattle in search of blood and answers to how you became what you are. Will you be a hideous Nosferatu who’s attacked on-sight on the streets, a high-flying Ventrue, or a suave and seductive Toreador?

Expect deep decision-making, blood-letting abilities, and a deliciously dark city to feast upon.

The original Dying Light remains a high benchmark of the zombie-apocalypse genre. The parkour mechanics gave it a great sense of flow as you bounded between the rooftops, and the online co-op mode is one of the best ways to do your gaming alongside your friends. It was set in an intense and violent open world that always felt threatening.

But its story left a bit to be desired, which is why Chris Avellone (Fallout: New Vegas, Baldur’s Gate) has been brought in to pen the sequel.

The game world will adapt to the decisions you make, and zombies will of course continue to be the fast-running, ravenous threat we know them to be from the original. Where the first game was one of the surprise hits of the previous decade, expectations are high for this one.

There’s something distinctly ‘PC gaming’ about the Mount & Blade series. It’s heavily systems-based, as you strategically build up a feudal kingdom, defend and expand it, plan out large-scale battles, then fight in them yourself from a first-person perspective.

There’s a lot going on in these games, so it’s no surprise that developer TaleWorlds has taken its time (eight years and counting) with the sequel.

Bannerlord will feature more detailed politics and dialogue systems, myriad factions, and the ability to bear children, who will succeed your character should you die.