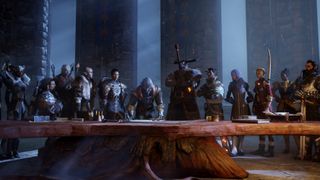 Warning: Spoilers for pretty much all of Dragon Age ahead.

Dragon Age 4 has been on every fan’s mind since Dragon Age: Inquisition’s last DLC, Trespasser. While Trespasser ended on one heck of a cliffhanger, it didn’t tell us much that we didn’t already know: Solas is an elven god called Fen’harel and he is very much down to commit genocide in order to restore the elven people to who they were before.

But what one new thing Trespasser did hint at was this: the Tevinter Imperium is highly likely to be a location that we’ll be visiting in Dragon Age 4, maybe even the main location. We also know that Seheron, the island where the Qunari people reside, may also be visited in the next Dragon Age, thanks to their constant warring with the Imperium.

So with all that in mind, we’ve narrowed down a list of Dragon Age characters that we think (and hope) will return in Dragon Age 4. Most of these characters are either from the Tevinter Imperium, or have close relations within the Imperium and/or the Qunari, and have featured somewhere in the Dragon Age series to date - either in the games or through the comics and books.

Here are familiar faces do we think will be making a return.

Let’s get the most obvious answer out of the way: Dorian Pavus. Fans will know him as the Tevinter mage companion from Dragon Age: Inquisition. Dorian is practically known as a pariah to not just to society, but to his family as well. This is due to him being a gay man, which goes against what Tevinter expects from men of his status.

Despite all the hatred that Tevinter feels for Dorian, he loves his homeland and wants to create a Tevinter where prejudices don’t run amok. In Trespasser, Dorian officially announces he’ll be leaving the Inquisition to take his father’s seat on the Magisterium, a ruling body of mages that makes the laws of Tevinter. With Dorian in such a high position in a place that’s so important to Dragon Age 4, if we don’t run into him then this would be a huge mistake on BioWare’s part.

Maevaris Tilani isn’t known too well by fans who have only played the Dragon Age games. Her name appears briefly in Dragon Age: Inquisition during a mission you can obtain at the war table, but not much is known about her. Her first, full appearance is in the Dragon Age comic ‘Those Who Speak’ which features well-known characters like Varric Tethras, Alistair Theirin and Isabela. Like Dorian, she is seen as an outcast of Tevinter society, though this is because she is a transgender woman.

Regardless of her troubles, Maevaris is part of the Magisterium and strives towards a more liberal Tevinter, forming a group called The Lucerni in an effort to restore and redeem Tevinter. She holds an incredible amount of power, and like Dorian, it would feel strange for her to not at least make an appearance.

Fenris is a potential love interest and companion to Hawke in Dragon Age 2. When we first meet Fenris, we discover that he was originally the property of a Magister called Danarius and as such, the cruelty Fenris has suffered through has made him wary of mages and their power. Throughout Dragon Age 2, Fenris is able to fully escape his master’s clutches for good, but still holds resentment for the Imperium.

On January 15 2020, Fenris received his first comic. It is entirely canonical, and follows him throughout his time as a mage-hunter in the Imperium. If Fenris is still around during the time of Dragon Age 4, we’re convinced that players will run into him sooner or later. Well, unless BioWare decides to kill him off at the very last minute.

Players may not have expected Shale to be on this list, especially as they only appear in the first Dragon Age game. But Shale is much more important than you may realize, as she - alongside Wynne, another companion from Dragon Age: Origins - has been searching for a way to revert herself from a golem and back into a dwarf.

In Dragon Age: Asunder, while Wynne has died, Shale still hasn’t managed her goal just yet. With the Tevinter Imperium being ruled be significant, powerful mages…Well, it’s the best place for Shale to find the answer to what she’s looking for.

Sten is a companion that Dragon Age: Origins fans will recognize. He is a Qunari that was sentenced to be hanged after he killed an entire family. Weirdly enough, there’s a reason for that and, if you spare him, you’ll find out that Sten isn’t much of a bad guy after all.

Since the events of Origins however, Sten has become The Arishok, a leader of the Qunari. He replaced the defeated Arishok - which Hawke killed back in Dragon Age 2 - and has since been trying his best to crush the Tevinter Imperium like the rest of his people. While Sten’s fate can be determined by the player in Dragon Age: Origins, BioWare may make it so that Sten comes back regardless of whether he is dead or not.

Sandal was sadly absent in Dragon Age: Inquisition, but that hasn’t stopped him from being one of the most mysterious, intriguing characters that Dragon Age fans want to know more about.

Dwarves in the Dragon Age universe don’t have access to magic like everyone else, but Sandal seems to be a unique case. While he explains his ‘magic’ is actually through the use of enchantments, we’re still not entirely convinced that Sandal is who he appears to be.

Sandal has appeared in nearly every Dragon Age game, and with the mystery around who he really is and the power he possesses, we’d be surprised if he doesn’t make an appearance somewhere in Dragon Age 4.

Now for a character who has appeared in every single Dragon Age game: Leliana. Leliana is a character that has changed so much since she first appeared in Dragon Age: Origins, it’s hard to not expect her to appear in Dragon Age 4, either as an advisor to your protagonist or as the Divine, the head of the Chantry, a religious organization.

Leliana has so many fingers in so many pies thanks to her connections, plus there’s still a lot of unanswered questions when it comes to who she is. Is she touched by a God to have come back from the dead, or is there something else that makes Leliana so special? Whatever the answer is, we hope it’s answered in Dragon Age 4.