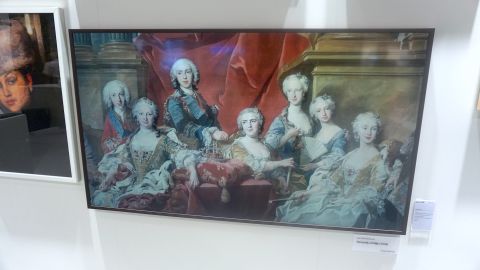 Pretty as a picture and now packing Samsung’s QLED screen technology, the 2019 version of the Frame TV is looking easier to recommend than earlier models in the range.

With its screens’ ambient modes and cable tidying solutions, Samsung has made a big effort over the past few years to make your TV not just an entertainment hub for your living room, but an item of furniture that’s attractive in its own right.

The Frame TV range is in many respects the epitome of that. Designed to be wall mounted, Samsung partners with galleries and collections across the globe to bring famous works of art to its The Frame TVs as a catalogue of screensavers. When in standby mode, they’re displayed instead of a black empty screen, and suddenly your TV is acting as an artwork as well as a gadget.

It’s not been plain sailing for the range, which has seen the concept let down by earlier models’ so-so picture performance when acting as a regular screen. But The Frame TV for 2019 looks like a far more refined take on the idea.

UPDATE: Samsung made use of the CES 2020 expo to announce brand new TV sizes (32-inch, 75-inch) and bezel finishes for its QLED Frame TV – alongside a brand new rotating TV, the Samsung Sero.

To take advantage of the library of artworks that power the TV’s Art Mode, you’ll also need to cough up for a $4.99 a month subscription.

The look of The Frame TV is just as much part of its appeal as the quality of the picture it produces as a regular television. It’s designed to slip unassumingly onto a wall, and Samsung delivers lots of smart little touches to make that easy.

For starters, it features customizable bezels. You’ll be able to pick from one of several different bezel finishes, including white, black, grey, and light and dark brown wood – with new beige and burgundy finishes for 2020 – which make it look particularly ‘frame-like’ when hung on a wall.

Speaking of which, Samsung makes a a big effort to make wall mounting The Frame TV a smart option. It packs in a “gap-free” wall mounting system with each The Frame set, letting it hang without jutting out at an angle or leaving a gap on your wall.

The screen also comes with Samsung's One Connect cabling system. This uses just a single clear cable that leaves the TV and connects to a separate connection box that houses power, USB and HDMI connections. You’re left with a very discreet design, even before taking into account the Art Mode.

But the Art Mode is what you’re really here for with The Frame TV, and the 2019 models are looking better than ever. Now sporting a 4K QLED panel, they’re rich with color and contrast levels.

In fact, during the demo showcase we saw at the Alfandega Porto Congress Centre in Porto, Portugal for Samsung’s annual Forum event, we had to do a double take when passing The Frame TV exhibit. Samsung had smartly lined up the Frame TVs on a wall with actual physical works of art – it was only when the TVs cycled to a different artwork did we first realize which frames were filled with paper, and which had a screen inside.

Samsung manages that thanks to an always-scanning brightness sensor. It allows it to adjust the screen’s brightness to ambient surroundings.

This isn’t a unique feature by any means in TVs, but Samsung’s application is slightly different – in Art Mode it’s tweaking brightness and contrast, not necessarily to make a moving image more legible, but to make the pieces of art look more convincingly like they’re placed on actual canvas, which it achieves remarkably well.

It’s still not quite a match for the picture quality of the standard QLED line up, let alone the show-stopping Q950R 8K model. But this year's revision sees it move away from that novelty feeling that previous versions suffered from.

Samsung’s not to be left behind when it comes to smart features. Every TV worth its salt these days has to have support for a voice assistant with which to control volume, channel changes and all manner of other features.

Most manufacturers have to rely on support from the big two names in smart home control – Amazon’s Alexa, or the Google Assistant. While Samsung’s set supports these operators too, it also has its own Bixby voice helper built in.

Like the competition, Bixby through The Frame TV can be commanded to tweak smart home gadgets, like the brightness of connected lighting, or the temperature of a web thermostat.

In TV viewing situations though, Bixby can go one better, trawling metadata to make for a universal search engine of all the content providers piped into your smart TV. Ask for a show and, no matter what source it’s coming from, Bixby will be able to deliver it for you.

The speaker performance of The Frame TV was an area we’ve not yet been able to check, with the models we saw running in a demo silent mode.

However, Samsung is investing in AI tech across its range to improve audio performance, tuning TVs based on their ambient surroundings, and tailoring output based on its knowledge of the show or movie been displayed.

We’re hoping that means we’ll get clear dialogue from The Frame TV, along with some strong bass for action flicks and a sense of presence from sporting content. For now though, we’re going to have to wait for some more extensive testing.

The Frame TV for 2019 is looking like a very special set, unique among the competition.

It’s commitment to welcoming industrial design and its access to hundreds of artwork screensavers set it apart. If a TV is as much a fashion statement as it is an entertainment hub for you, The Frame TV could finally be worth a look, thanks to its improved QLED panel tech.