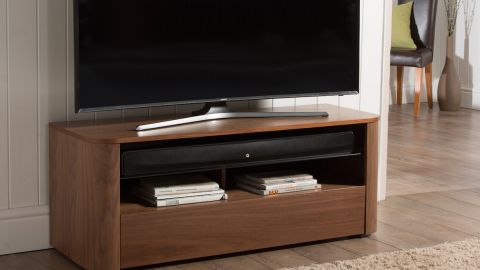 A truly great-sounding soundbar from Q Acoustics. Sure, the M4 falls on a few points: a plain design, no Wi-Fi, and only support for 2.1 channels of sound. But for a £400 / $400 price tag, it's still a highly attractive proposition that delivers on the most important feature – the audio.

Update: As good as the M4 is, its siblings in the M range are proving stiff competition. The lower RRP Q Acoustics M2 soundbase comes with a sleeker design, and added benefit of HDMI ports. Deals being what they are though, we have seen the M4 dip below the M2 in price now and then. Read our original review below to help you make up your mind...

If you're prone to judging books by their covers, you may not give Q Acoustics M4 soundbar a second glance – but it'd be your mistake.

Sure the Q Acoustics M4 soundbar doesn’t look like the stuff of home entertainment dreams. For starters, it lacks the glamorous design of many of its rivals, with a pretty unattractive exterior. It also only manages a 2.1 speaker count at a time when soundbars are offering 10 channels and Dolby Atmos decoding. There’s not an HDMI input/loopthrough in sight either.

Plus, it marks British hi-fi brand Q Acoustics’ first toe-dip into soundbar waters - and surely even a brand as critically acclaimed in the hi-fi world as Q Acoustics couldn’t be expected to nail the soundbar format at the first time of asking?

Well, it turns out that looks and first impressions don't count for much. Because, two years on, there's still a lot to love about Q Acoustic's M4 Soundbar and we continue to recommend it as one of the best on the market that money can buy.

The £330 ($380 or about AU$530) M4 is a bit of a chunky monkey by modern soundbar standards. Its rear sticks out nearly 15cm, and it stands 9cm high - measurements which could potentially make it a no-go zone for some living room set ups. It will, after all, protrude a long way from your wall if you decide to hang it up, and it could obscure the bottom of your picture if you own a TV that sits unusually low on its desktop stand.

Its 1m width, though, is reasonably compact by sound bar standards, and should allow it to sit on most TV stands fairly comfortably without untidily stretching far beyond the left and right edges of your TV.

Build quality is high for such an affordable sound bar. It feels weighty and solid, and while the finish isn’t glamorous there are a few tasteful touches including a gentle forward angling of the speaker grille.

Connections are a touch surprising in today’s marketplace in that there’s no HDMI input/throughput. This means you can’t pipe an HDMI-based source through the M4 like you can with a growing number of the latest soundbar solutions.

Instead, you’ll have to connect digital audio sources (most likely your television if you don’t want to have to keep swapping cables around) via optical audio cable.

Analogue inputs options comprise a single stereo phono line input and a 3.5mm headphone-style jack, but you can also connect Bluetooth devices (the aptX lossless audio standard is supported) via normal pairing or the ‘NFC’ system where you just have to hold an NFC phone or tablet close to the soundbar’s NFC receptor.

One final connection worth mentioning is a subwoofer line out. The M4 actually contains a built-in subwoofer, but it’s always nice to see a speaker bar being thoughtful enough to support the addition of an external subwoofer – for bass heads who just aren’t happy unless low end frequencies are making their trousers flap around their ankles.

One last crucial area of the M4’s design to cover is its speaker configuration. And it’s here that the M4 starts to set our pulses racing, despite it ‘only’ boasting a 2.1 speaker array.

For starters, the main drivers are 65mm x 65mm Balanced Mode Radiator designs - which means, essentially, that they should be capable of dispersing sound more widely than typical mid-range drivers, reducing the need for you to sit in a ‘sweet spot’ to get great sound quality.

Bass duties are handled by a 100 x 150mm twin-coil subwoofer that uses an elliptical design to aid speed and detail, and fires out of the M4’s bottom edge. To give the subwoofer’s bottom-firing bass room to breathe, the M4 comes mounted on four short legs.

When it comes to power, you get 25W each for the left and right channels, and 50W for the subwoofer. These figures aren’t up there with some of the bonkers numbers you see associated with some soundbars, but anyone who’s spent any time around audio products will know that it’s seldom the amount of specified power that matters; it’s what you do with it.

The M4 is pretty easy to set up once you’ve got your head round the fact that it’s not exactly overburdened with inputs.

Most people will find they’ll use the M4 most if they connect their TV’s optical audio output (assuming it has one) to it. Some may prefer to connect separate external sources directly to the M4, though it doesn’t really have enough inputs - especially digital ones - to function well as an audio switch box in the way that an AV receiver might. Especially considering that it doesn’t provide any accompanying video loopthrough options.

Establishing Bluetooth connections, however, couldn’t be easier. Just pressing a single button on the M4 sets it into pairing mode, or if your smartphone or tablet supports NFC technology you just need to hold your device near to the M4 for a wireless connection to be forged. The M4 can remember up to eight different Bluetooth devices too, for instant future reconnections.

It’s a pity the M4 doesn’t carry an onscreen display, though. Such things are rare at the M4’s price point, and in truth the way its ‘colour coded’ LED light serves a similar purpose by glowing red for off, blue for Bluetooth, and white and green for the two analogue sources.

Unusually for a soundbar review, we’re going to kick off the performance section by talking about the M4’s performance with music. Why? Because it’s just so damn good.

Q Acoustics is - or has been up to this point, at least - first and foremost a hi-fi brand. But even knowing that couldn’t prepare me for the sensational musicality of the M4. No matter what music I fed it, from classical through to pop, electronic and rock, the M4 handled it beautifully.

The sound is so clean and detailed that unless you’re already the owner of a pretty high-end hi-fi system you’ll hear subtleties in your favourite tracks that you won’t have heard before.This precision never becomes soulless or cold, though. The tone contains just the right amount of warmth, and the speakers have enough dynamic range to ensure that not even the brightest of treble details sounds harsh or over-emphasised.

Bass slots pretty much immaculately onto the lower end of the open, dynamic mid range, and is light and pacy enough to keep time with everything from the perkiest of pop to the fastest of death metal. Serious bass heads will find that the subwoofer can’t swell to the insane, air-gobbling levels they’d ideally like it to, but even under duress the bass does at least always sound refined and clean rather than loose and grunty.

There’s a surprising amount of stereo definition too considering the M4 is using wide-dispersion drivers. Yet at the same time the music fills even a pretty large room with a surprisingly powerful sound stage that expands beyond the physical dimensions of the soundbar that’s producing it.

The worry with the M4 is that the finesse and refinement it exhibits with music might make it a bit too gentlemanly and restrained for a full-bore action movie sequence. Happily, however, this turns out to be anything but the case.

In fact, run throughs of favourite noisy bits (from Mad Max: Fury Road, Deadpool and that noisiest of all noisy films, Pacific Rim) show that applying some refinement to all the mid-range drama, extreme volume fluctuations and, of course, frankly foolish amounts of bass associated with action movie mixes can actually be a very good thing.

The thing is, while you don’t feel quite as aware of some of the most extreme movie mix dynamics on the M4 as you do on bigger multi-channel sound bars - especially those that come with an external subwoofer - we’d argue that the M4’s tighter but still surprisingly powerful approach is actually more immersive. The soundtrack serves the film rather than just becoming this separate beast that you find yourself listening to for listening’s sake.

The M4 also confounds another concern we’d had about its movie performance; that its lack of a dedicated centre channel might leave dialogue sounding either overwhelmed by other soundtrack elements or dislocated from accompanying images.

Again, however, we were wrong. Dialogue actually remains clear and credible - with both male and female voices - no matter how much of a cacophony may be going on around them, and there’s no sense at all of dialogue drifting vaguely off into the distance.

Perhaps the single biggest surprise about the M4’s movie performance, though, is how aggressive it can be. It’s hard to believe that the bone-crunching crashes of Mad Max and giant robot footsteps and punches of Pacific Rim are coming from the same soundbar that only minutes earlier had been playing Pergolesi’s Stabat Mater so gorgeously.

That all being said, there are only two negatives we can fairly raise against the M4. First, while the bass sounds remarkably good for a built-in radiator system, it can’t expand as far or reach as low as a good external subwoofer might.

We suspect this may only feel like a real weakness, though, to people who’ve already owned or experienced a sound system that uses an external subwoofer and so are more keenly aware of the M4’s bass limitations. Plus, of course, the M4 does provide a subwoofer line out if your need for bass really isn’t satisfied by the M4’s integrated subwoofer.

The other issue is that the M4 doesn’t give you even a hint of surround sound, and so could upset movie fans who like the full sense of immersion a well-crafted surround sound mix can create. However, Q Acoustics has very deliberately kept things simple by not attempting to ‘muddy the waters’ by trying to apply (often ugly) psycho-acoustic processing or trying to introduce expensive extra drivers and (often awkward to accommodate) sound deflection/sound beam technologies.

The bottom line is that precious few ‘multi-channel’ soundbars do surround sound convincingly, and those that do cost way more than the M4. So - slightly to our surprise - we feel the M4’s 2.1 approach is actually rather sensible, as it would surely have been impossible for it to retain such a high quality of sound across so many types of audio if it had started trying to stretch itself too far.