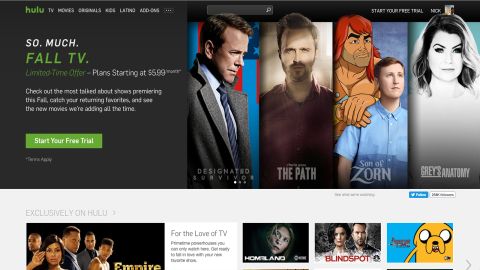 Hulu remains a great source for streaming TV shows, plus its original series and film offerings help make it a compelling pick at its relatively low price.

While Hulu has cheaper plans with straightforward online shows, its various add-ons for over 50 live TV channels or other online services makes it a versatile and flexible portal for getting all that TV content into your eyeballs.

Hulu has also worked a lot on improving its streaming service, wrapping what was previously Hulu Plus into its main website for an overall simpler interface – even if it took free television options off the table.

Likewise, in the past, Hulu was primarily known in the past for television content, most notably for offering TV shows the day after they air on their home networks. That was fine then, but now the service has made a bold Netflix-like push into original content and packs in a lot more notable films as well.

But given all of that, what exactly is Hulu like as a service in 2019? And given all of the other streaming apps and services available these days, is Hulu really worth your monthly cash? Here's what we think.

UPDATE: When we reviewed Hulu earlier in 2019, one of our biggest criticisms was the lack of offline viewing options. But the TV streaming service has now added the ability to download shows for offline viewing. The iOS offline viewing update rolled out first, but now Android and Fire users can also watch their favorite shows offline now too.

This makes sense. Some of Hulu's biggest competitors have offered offline viewing for some time. But it comes with a catch: you need to be a subscriber to the $12 per month Hulu plan that comes without ads.

How much does Hulu cost?

There have been some changes to Hulu's pricing plans over the years; but rather than simply hiking up the price over time, the cheapest Hulu plan got even cheaper.

You can now sign up to Hulu for only $5.99 per month, which is a good step below Netflix's $8.99 Basic Plan. Netflix's lowest-level plan also doesn't include HD video support, while Hulu offers plenty of HD content as well as some Ultra HD 4K programming via its Hulu Originals.

However, Hulu's low-cost pricing plan comes with a catch: commercials.

If you're used to Netflix and Amazon Prime Video, the sight of ad breaks every so often during a TV show will be jarring, to say the least. These breaks occur during the same times they would on broadcast TV, and typically last between 90 and 120 seconds each. For films, you'll thankfully see a pre-roll of commercials instead of interruptions - but you can't escape the cloying grasp of commercials.

Can't stomach the idea of commercials on your streams? Luckily, Hulu does offer a second ad-free option — but it'll cost you. You can get a nearly commercial-free plan for $11.99 per month instead, ensuring that commercials are absent from the vast majority of programming.

Unfortunately, even if you opt for the pricier service, a handful of shows (including Grey's Anatomy, New Girl, and Agents of S.H.I.E.L.D.) still have before-and-after commercials on the pricier plan due to rights issues.

If you fancy the idea of live TV, you can add on over 60 TV channels for a total $44.99 per month. You can also add an enhanced DVR service for $14.99 per month or unlimited in-house screens (plus three on-the-go screens) for $9.99/month.

This review only covers the base Hulu experience, but live TV is an option that might appeal to cord-cutters who still crave live programming.

Additionally, you can add content from premium channels to any Hulu plan. HBO is available for $14.99/month, while Showtime is $10.99/month and Cinemax is $9.99/month. When Disney Plus launches in November, you'll also be able to get a joint bundle with Hulu and ESPN+ for a highly affordable $12.99.

If Hulu is one thing, it's versatile.

If you're reading this article, then there's a very good chance that you have a way to watch Hulu.

The service is accessible on a wide number of devices and platforms, including via the web, as through apps on iOS, Android, and Amazon phones/tablets. It's available via Roku boxes like the Roku Streaming Stick and Roku Ultra, Apple TV, Chromecast, TiVo boxes, and smart TVs from makers like Samsung, Sony, and Vizio.

Even game consoles are in on the fun, from current platforms like PlayStation 4, Xbox One, and Nintendo Switch to the PlayStation 3, Xbox 360, and Nintendo Wii U and Wii. It's not quite as ubiquitous as Netflix, but again, you shouldn't have a problem finding access via your computer, smartphone, tablet, or set-top box.

Unfortunately, both the base plan and commercial-free version only let you stream to one device at a time, and there's no way to add to that tally. The much pricier Hulu + Live TV service bumps that number to two simultaneous streams, and then you can pay more to add further devices into the mix. Given that, the base Hulu plan might not be the best fit for a family or sharing with roommates.

Hulu's main draw is undoubtedly its TV offerings, as the service has partnered with the big four broadcast networks: ABC, CBS, NBC, and Fox. Those channels' top shows are available to stream the day after they premiere, and Hulu also keeps deep back catalogs of many shows. For example, it has almost 400 episodes of Saturday Night Live on tap as of this writing.

Some cable networks are in the mix as well, such as FX, Bravo, Lifetime, TNT, and Comedy Central, but they don't typically give you the latest season or episodes. As of this writing, for example, FX has the first full seasons of both Legion and Atlanta, but nothing from the current second season of each. Bravo lacks the recently-ended season of Top Chef, and while AMC is shown, Hulu doesn't have The Walking Dead.

Like Netflix, Hulu has been making more and more of a push towards original content, and it's starting to pay off. Hulu is the home of the critically acclaimed dystopian series The Handmaid's Tale – with The Handmaid's Tale season 4 expected in 2020 – while comedies like Difficult People and Casual have drawn praise along with Marvel's The Runaways. The selection isn't nearly as broad or expanding as rapidly as Netflix's, but there's some really strong stuff here.

Hulu also offers a strong selection of kids' programming, including Cartoon Network favorites like Adventure Time and Steven Universe, as well as shows like Gravity Falls, Curious George, Sesame Street, and The Wiggles. It also has a surprisingly vast array of anime on demand, including more than 1,000 episodes of Naruto series along with hits like Bleach, One Piece, Sailor Moon, and My Hero Academia.

Although best known as a TV service, Hulu has gradually beefed up its movie offerings. Netflix arguably still has the upper hand, but browsing the Hulu listings, you'll find everything from Arrival, Creed, and The Magnificent Seven to Star Trek Beyond and Colossal. You probably wouldn't get Hulu solely for its film library, but it's a nice little bonus.

You won't be able to watch any of this content from a plane or anywhere else without a net connection: Hulu still hasn't offered downloading for offline viewing as of this writing, despite announcing plans at the start of 2017. Netflix and Amazon both let you do that for select content.

Hulu doesn't feel quite as essential and all-encompassing as Netflix, and it's no longer the only or most obvious way to watch streaming TV shows. That said, Hulu has a lot of excellent content on offer, you can watch it pretty much anywhere, and the monthly fee is plenty reasonable for the shows and films you get.

However, paying for a streaming service and seeing commercials still doesn't sit right, even at Hulu's reasonable monthly cost. Having to pay $4 more a month to mostly get rid of commercials might also rub some subscribers the wrong way, but you'll have to decide whether axing ads is worth the extra $50-or-so per year.

Hulu has recently added offline viewing as part of its more expensive price plan, which may certainly sweeten the deal for many.

The commercials are still annoying and the aforementioned limitations might chafe, but Hulu is pretty ideal as a secondary service for cord-cutters to supplement Netflix or Amazon Prime Video with loads and loads of current and classic TV shows.