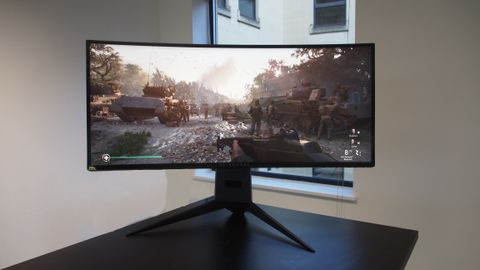 The Alienware AW3418DW gaming monitor is another ultrawide display that offers immersive gameplay experiences by filling the player’s peripheral vision with an elongated, 21:9 aspect ratio.

While most modern monitors and widescreen TVs have an aspect ratio of 16:9, a 21:9 aspect ratio means the screen is a lot wider on the horizontal plane. This extra visual real estate doesn’t just benefit games, as a wider screen can help productivity as well, allowing you to have far more open windows than usual.

However, with the Alienware brand, it’s no surprise that the AW3418DW is a gaming monitor first and foremost, and it goes up against the likes of the AOC Agon AG352UCG and  LG 34UC79G-B, two fantastic monitors which have made it onto our best gaming monitor list.

So, with some pretty stiff competition, let’s see how the Alienware AW3418DW performs.

Alienware is a brand that’s often associated with premium prices, and with ultrawide gaming monitors rarely coming cheap, it may come as little surprise that the Alienware AW3418DW is a pricey monitor, with a $999 price (£1,100, AU$2,099).

So, the AW3418DW has to prove the extra money is worth it in the performance department.

One thing that the Alienware AW3418DW has that its competitors do not, and which may make the high price tag worthwhile, is its ability to be overclocked to a 120Hz refresh rate, making it faster than its rivals.

One of the main things Alienware products are known for (apart from their high prices), are the sleek and eye-catching designs that embrace gamer aesthetics without being too over-the-top and garish. So, colored LEDs, metallic shades and sharp angles are all present and correct, but there’s also a, shall we say, ‘maturity’ about the design that means it’s a good-looking gaming monitor, without offending anyone’s tastes.

Due to the size of the screen, the Alienware AW3418DW comes in a very large box. Luckily, once opened, it is easily put together without the need for any tools. This makes setup much easier, and the hardware still feels nice and sturdy.  Once set up, the screen can be easily adjusted to make it more comfortable to use.

The thin bezels around the screen, especially the top and bottom, means the monitor isn’t taking up wasted space – but, bear in mind that this is a large monitor, and it will dominate pretty much any desk you put it on. The stand, made from metallic-coated plastic and featuring the Alienware logo in various places, does take up quite a bit of space on the desk as well, more so than the stands we’ve seen on other ultrawide monitors.

The back of the monitor is silver, with another Alienware ‘alien head’ logo that lights up, and a few more LED strips. Overall, the design here is quite nice and, if you’re not a fan of the LED lighting, you can turn it off using the onscreen menu.

Back to the front, and there’s a simple, yet alluring, line of text in the middle of the bottom bezel that simply says ‘Alienware’. Along the bottom-right side of the screen are the buttons that control the onscreen menu, along with the power button (which is lit up with an LED, which you can change the color of, like the other LED lights on the monitor).

There are no icons or hints of what each button does on the bezel, which keeps things looking neat and tidy. But, that can lead to confusion when trying to use the buttons to go through the menu options. Thankfully, Alienware displays the icons for what each button does when the onscreen menu appears (which happens when any of the buttons are pushed), making things a little easier.

Connection-wise there is an audio-in jack, DisplayPort 1.2, HDMI 1.4, a USB upstream port (for connecting to your PC), and two USB 3.0 ports, allowing the monitor to be used as a USB hub. There are another two USB 3.0 ports on the bottom of the screen, along with a headphone jack. If you extend the screen to the top of the stand, these ports are much easier to access than the ones on the back, so we commend Alienware for the clever placement.

Overall, the Alienware AW3418DW is a very nicely designed gaming monitor that sticks close to the look and feel of other Alienware devices. If you have an Alienware Aurora R6 desktop gaming PC, for example, this monitor will compliment it incredibly well. Even if you don’t own any other Alienware stuff, the design is subtle enough to fit in with PCs and peripherals.

One of the first things you’ll notice when you load up a game and begin playing on the Alienware AW3418DW, apart from the immersive aspect ratio that fills your vision, is just how gloriously smooth gameplay is. This is thanks to the 100Hz refresh rate and G-Sync technology, which offer high frame rates without screen tearing. The results are remarkable.

For most gamers, going back to a monitor without G-Sync will be a real struggle.

While 100Hz is a higher refresh rate than many standard monitors (which usually max out at 60Hz), it’s not quite the highest refresh rate possible for G-Sync monitors, which are capable of up to 240Hz. However, it’s pretty standard for 21:9 monitors, with the LG 34UC79G-B and AOC Agon AG352UCG both offering 100Hz refresh rates.

The Alienware AW3418DW has an ace up its sleeve, however, with an overclock setting that ups the refresh rate to 120Hz.

The jump from 100Hz to 120Hz is pretty noticeable. When overclocked, the action onscreen becomes incredibly smoother. In playing Wolfenstein II, which maxes out at 100Hz, and Call of Duty: WWII, both at 100Hz and 120Hz – in both games, the performance of the Alienware AW3418DW impresses.

The jump from playing at 60Hz to 100Hz really is impressive, and it’s something that you really need to experience yourself. Everything feels much more smooth and responsive, especially with fast-paced action. Going back from 100Hz to 60Hz can be very jarring, almost like the character you’re playing as is wading through quicksand.

Going up to 120Hz is also noticeable. If you have the hardware to cope – we played with an Nvidia Titan Xp graphics card, allowing us to whack graphical settings to the max while maintaining those high refresh and frame rates – you’ll really see the difference.

We’re not exaggerating when we say this is a game changer.

You can also enable a faster response time using the on screen menu, choosing between ‘Normal’, ‘Fast’ and ‘Super Fast.' The idea is that the faster the response time, the less lag there is. So, there is less time between the movements you make with your mouse and keyboard and how your character moves on the monitor.

While this is a welcome option to have, we find that putting the response time to ‘Super Fast’ adds an element of ghosting on screen. This manifests itself during games with a faint grey outline during fast action.

We also notice it outside of gaming and during, for example, browsing websites where the outlines appear around pictures and text when scrolling. It’s a minor complaint, and it can be remedied by setting the responsive time to ‘Normal’, or even ‘Fast’. But, for us, the benefits aren't worth it. The response time of the Alienware AW3418DW (4ms) should be low enough for most people anyway.

As we’d expect from a G-Sync panel, there are no instances of screen tearing when playing. Overall, games look amazing on the screen, and there are enough options for you to tweak the monitor to get your desired performance.

The Alienware AW3418DW also gives you the option of overlaying the frames per second (FPS) count in the top-left hand corner of the screen, which is handy if you want to see how well your hardware is performing. There are enough useful features like this for gamers that help justify the Alienware AW3418DW’s high price tag.

As far as standard image quality goes, the IPS (in-plane switching) panel of the Alienware AW3418DW does an excellent job, though some people may find it a bit bright at its default setting. Luckily, the onscreen menu is easy enough to use that tweaking the settings takes no time at all, and there’s a decent number of pre-set configurations to help as well.

The IPS panel also offers very wide viewing angles, which is pretty essential for an ultrawide monitor (especially a curved one), with color accuracy holding up in every part of the monitor.

Overall, we find the Alienware AW3418DW to be an excellent gaming monitor when it comes to performance, with superb image quality. Also, when overclocked to 120Hz, this is the fastest ultrawide monitor currently on the market. That may just be enough to justify its more expensive price tag compared to its competitors.

There’s a lot to like about the Alienware AW3418DW. It’s large, with the 21:9 aspect ratio really helping to immerse you in your games. This can also give you a competitive edge in that you see more of the battlefield than your competitors.

It’s also fast, with an overclocked refresh rate of 120Hz, making it a speedier ultrawide than any of its competitors. If you’re looking for the fastest 21:9 monitor on the market, there’s only one choice: the Alienware AW3418DW.

G-Sync support (there’s also a version that supports AMD’s competing FreeSync standard), is the icing on the cake, making games even more of a joy to play on this screen.

Then, there’s the design. We’re very taken with the understated, yet still easily identifiable, aesthetics of the Alienware AW3418DW. It’s clearly a gaming monitor, but it doesn’t beat you over the head with a brash design. Instead, it leaves its (excellent) screen to do the talking.

However, there are some aspects of the Alienware AW3418DW that we aren't too fond of, but luckily these were easily out numbered by what we liked.

The high price tag is obviously one of them. Ultrawide screens are never cheap, but the Alienware AW3418DW is a fair bit more expensive than its competitors. If you’re conscious of you budget, then the AOC Agon AG352UCG is a worthy choice.

However, if you’re willing to pay a premium for the fastest ultrawide monitor on the market, then you’ll want to shell out for the Alienware AW3418DW. You won’t be disappointed.