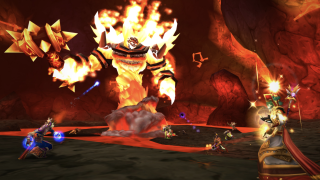 You asked for a faithful recreation of the 2004 original, and you've got it – World of Warcraft Classic is live, and with it comes multi-hour queues of thousands of players waiting to play it.

Players in their tens of thousands are having to wait upwards of two hours to get online to play World of Warcraft Classic, which dials back time 15 years to present players with a version of the game as it was close to its original launch. That means no expansion packs, and far fewer hand-holding features – just the premier massively multiplayer RPG at what some would consider its purest, richest state.

It's enlivened the playerbase to a degree that some wouldn't have thought possible for a game this old, with developer Blizzard saying that as many as 2 million players have logged on to create characters for the mode's launch.

Queues are slightly shorter on Normal and Role Playing servers – but with PVP being the most exhilarating part of old-school WoW, the player-vs-player servers are most popular. Once inside, a new player management system called Layering should even out populations to keep busy areas from buckling under the strain. But some players are still finding that over-population is making some kill-and-collect quests (a huge part of WoW Classic's levelling) hard to finish due to the number of characters taking part.

Blizzard is now slowly adding more servers to shorten queue times, but will need to be careful to switch on just the right amount so that these servers don't become barren once the initial launch hype slows.

To play World of Warcraft Classic, all you need is a subscription to the regular World of Warcraft. You'll then be able to make a separate character to exist in this siloed version of the MMORPG world.