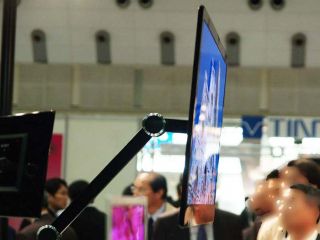 Sony's new OLED TV is just 9mm thick - or should that be 'thin'?

Pop into the Display 2007 event being held in Tokyo before it closes on Friday and you'll have a chance to spot one of the most startling screens yet - a full high-definition organic display made by Sony that is less than 1cm thick.

The unnamed 27-inch OLED screen is just 9mm deep from front to back, yet is still capable of full HD TV at a 1920 x 1080p resolution. Moreover, it has a stunning 1,000,000:1 contrast ratio, which is one of the chief draws of OLED displays, resulting in brighter colours and deeper blacks.

Sony's other crowd drawer is an 11-inch OLED screen that's quite a bit lower on the pixel count at 1024 x 600 dots but outdoes the bigger display by packing everything into a depth of just 3mm.

On top of the good looks, OLED screens also consume less power than LCD or plasma displays, due to them not requiring a backlight, making for some lean, green, mean television sets. For a closer look at the gorgeous new Sony screens, be sure to check out the gallery of photos at Japanese site AV Watch .