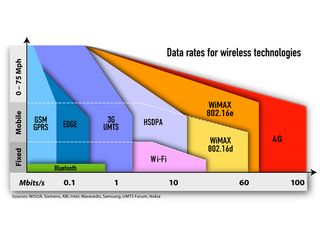 Wireless evolution will necessitate phones that can work out for themselves what protocol to use.

Next time you're stuck in a 2 or 3G phone black spot and cursing your choice of mobile network spare a thought for the poor bureaucrats of Japan who are struggling to create a framework for something called cognitive radio as they plan for 4G in the near future.

The Japanese Communications Ministry is about to start work [Subscription link] with private sector specialists on a set of specifications that it hopes will become the international standard way for future devices to handle an increasingly complex wireless environment.

'Cognitive radios', as they're called, will be able to analyse the various wireless protocols - such as WiMAX, Wi-Fi and 4G - they find and select the best ones for voice calls, data transmission and so on. They will also have the ability to pick methods that avoid congestion and will combine protocols as needed.

If the ¥10 billion (£42 million) the Japanese government is spending on the plan, which should be ready by 2011, results in a genuine global standard then it will have paid off many times over.