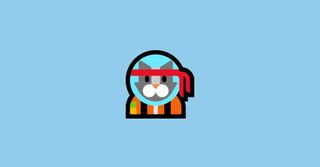 Microsoft has worked out another exclusive emoji for Windows 10, the infinitely awesome Astro Cat. Found by Emojipedia, the emoji is achieved by joining the ‘Cat Face’ and ‘Rocket’ emojis by a small string of characters in between.

Specifically, this technique is known as the ‘zero width joiner’ (ZWJ), a specific string of characters that, when placed between two emojis in the proper order, will produce a whole new emoji. However, at this point only Windows 10 supports the zero width joiner.

This means that, unless you’re viewing this sequence of emojis on Windows 10 through various apps, all that you’ll see is an inexplicable cat head placed next to a spaceship.

The resultant emoji is just downright cute – though not without clutch branding as evidenced by the cat’s Microsoft logo on its suit. With the read headband, the character even includes a nod to Microsoft’s classic Ninja Cat emoji, one of the first to use the ZWJ method.

So, when will other operating systems (OS) support Astro Cat? That’s tough to tell, though it’s likely that other OS makers will follow Microsoft to support ZWJ in due course.