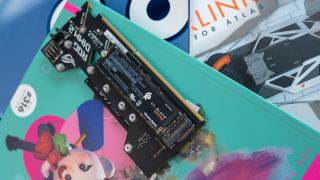 Overall, Western Digital has brought in a few small increases in speed, but a ton of additional value, to put its Black SN750 ahead of other drives that have outpaced it, such as the Samsung 970 Pro (reads and writes up to 3,500MB/s and 2,700MB/s, respectively).

WD also claims to have found a way to double its storage density over its previous generation NVMe SSD, and the company plans to introduce a new 2TB option later this February for $499 (about £390, AU$700). WD also tells us it will introduce drives (500GB and up) bundled with a special heatsink created by EKWB by the end of Q1 2019 (roughly January to March) – sadly, this cooler won’t be sold separately.