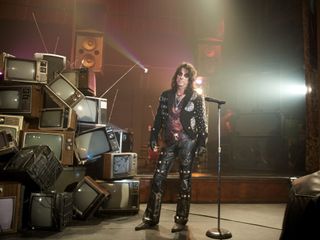 We promise we won't do any jokes about Alice Cooper being on the scrapheap...

Sony has announced it is to take part in a new television trade-in initiative, which gives consumers the chance to get money off new Bravia TVs.

All you have to do is take your old TV to one of the participating Sony stockists and you will get up to £150 off a new flat-screen TV.

To highlight how rock'n'roll this scheme actually is, Sony has enlisted the help of '80s rock star Alice Cooper to star in a new advert promoting the scrappage scheme – where he essentially tells you not to throw your old TVs out of a hotel window (geddit?) but exchange them instead.

Speaking about the new scheme, Matt Coombe, General Marketing Manager, Sony UK, explained: "The campaign offers customers the advantages of swapping old for new rather than simply throwing away – encouraging old televisions to be responsibly disposed of.

"Another important element of this campaign is the reassurance for our customers that Sony will help them through the digital switchover, we understand that peace of mind is currently high on priority lists at this difficult economic time."

Stores which have signed up to the scheme include: Comet, Marks & Spencer, John Lewis, the Sony Centre (obviously), and a good few independents as well.

If you want to learn more about Sony's scrappage plan, then point your browser to www.sony.co.uk/rockers.