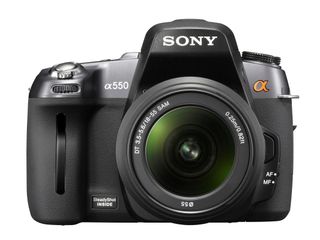 Sony has announced its latest DSLR cameras, with the Alpha a500 and a550 'packed with advanced Sony technology'.

The Sony Alpha a550 has a 14.2MP Exmoor CMOS sensor and an enhanced Bionz processor boasting low-noise images with high sensitivity up to ISO 12800.

The high-speed continuous shooting is up to five frames per second (fps) using the optical viewfinder and the a550 can manage 7fps in Speed Priority mode.

The 12.3-megapixel Sony Alpha a500 offers a 'crisp' high-contrast 3-inch Clear Photo LCD Plus screen with the same tilt range as the a550.

It also has what Sony describes as 'Class-leading shooting stamina' of around 1,000 shots.

Plus, Sony has added its popular compact feature 'Smile Shutter' to its newest DSLRS, automatically firing the shutter at the right moment.

TechRadar is getting its hands on the new cameras right now - so look forward to hands ons with the latest additions to the Sony Alpha range.