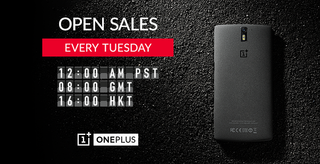 The OnePlus One turned up rocking flagship specs at a decidedly mid-range price, but getting hold of it has always been a little tricky.

The firm's invite-only approach punctuated every now and then by limited time, general sale periods is about to change, as from February 10 the OnePlus One will be available for anyone to buy every Tuesday.

The Chinese firm announced the move on its blog, stating "we will open up sales for 24 hours, starting at 8am London time (midnight in Los Angeles; 4pm in Hong Kong)."

For one day only, every week

It's worth remembering the OnePlus One is sporting last year's specs, and with the likes of the Samsung Galaxy S6, HTC One M9, LG G4 and Sony Xperia Z4 on the horizon you may want to see what the next generation has to offer. Not that they'll be anywhere close in price to the One.