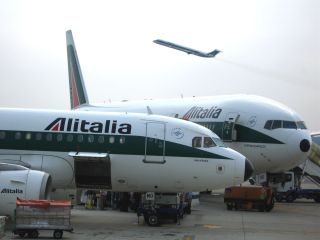 What's the first thing you do when you take your seat on a plane? And no, we don't mean making as much space between you and the larger gentleman next to you. Turn your phone off, naturally. But it seems the 'no mobiles on planes' thing is still a problem for many people - most recently, for three Italians.

They were arrested before take-off on an Alitalia flight after they refused to switch off their mobile phones.

It transpires that the captain of the flight had asked passengers to switch off their phones three times before initiating take-off as he suspected his navigation equipment was being affected by the signals.

Flight crew pinpointed the individuals to police who boarded the aircraft after the captain opted to delay take-off. Their errant behaviour could be rewarded by up to three months in prison as a result of a prosecution for violating safety regulations.

The plane took off an hour and a half late.