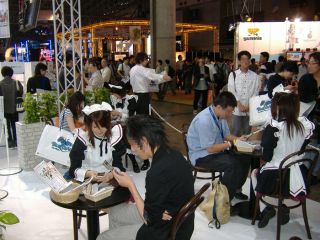 A survey in Japan has confirmed what we all suspected - the mobile phone is rapidly eating into how most people use their free time, as well as destroying more traditional forms of communication.

The research, by Nepro IT [ Japanese PDF link ], shows that 29 per cent of Japanese respondents use their phones for three or more hours every single day, with an unprecedented 13 percent of the total tapping away for at least five hours daily. A year previously, the same firm's data showed a quarter of people topping three hours a day.

More than talk and text

Additionally, almost three quarters of those surveyed say they send fewer written communications, such as letters or cards, and 11 per cent claim to have reduced face-to-face communication with friends and family.

Most significantly, more than 80 per cent of the 3,750 people in the study use functions beyond talking and texting - mostly downloading music and online shopping. As Nepro's clients include the major wireless networks in Japan, it's clear those companies can look forward to continuing healthy bottom lines.