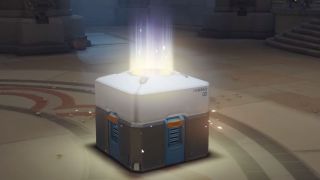 Nintendo, Microsoft and Sony will require videogame publishers to disclose drop rates for all games that include loot boxes in order to be released on the big three's consoles.

In other words, publishers will have to tell us what the chances are of players receiving certain items from loot boxes in their games – otherwise their games won't be released on those manufacturers' consoles.

The policy is part of an initiative that was announced by the Entertainment Software Association (ESA) on August 7, during a Federal Trade Commission workshop titled 'Inside the Game: Unlocking the Consumer Issues Surrounding Loot Boxes' (via GamesIndustry.biz).

What is a loot box?

A loot box (or loot crate) is an in-game feature that sees players spending real money to open an item with further randomized items inside. Essentially you spend money to open the box (or pay for a key to open it, among other variations) without knowing what its contents are – they could be useful or they could be worthless.

In a follow-up statement, the ESA explained that the initiative is designed to strengthen the video games industry's relationship with players – primarily when it comes to "trust".

"To further that effort, several videogame industry leaders are announcing new initiatives to help consumers make informed choices about their purchases, including loot boxes," the ESA's statement reads. "The major console makers – Sony Interactive Entertainment, operator of the PlayStation platform, Microsoft, operator of Xbox and Windows, and Nintendo, operator of the Nintendo Switch gaming platform – are committing to new platform policies that will require paid loot boxes in games developed for their platforms to disclose information on the relative rarity or probability of obtaining randomized virtual items.

"These required disclosures will also apply to game updates, if the update adds new loot box features. The precise timing of this disclosure requirement is still being worked out, but the console makers are targeting 2020 for the implementation of the policy."

The disclosure of drop rates will, according to the ESA, "apply to all new games and updates to games that add such in-game purchases and will be presented in a manner that is understandable and easily accessed".

Simply put, this means players should easily be able to see the odds of getting a rare item (for example) before they choose to spend real money on a loot box, allowing them to make a more informed decision as to whether or not to make a purchase.

The ESA says several of the major publishers who are members of the association either "already disclose the relative rarity or probability of obtaining in-game virtual items from purchased loot boxes", while "other major publishers have agreed to do so no later than the end of 2020".

However, publishers aren't bound by this agreement, and there are potential loopholes – more on that shortly. And some publishers will likely be less enthusiastic about complying than others, as it could mean less revenue from loot boxes.

Here's why it's such a big deal

That's why it's important that Nintendo, Sony and Microsoft are now on board. While previously publishers were essentially left to their own devices, the new initiative puts serious pressure on publishers to disclose drop rates.

If any choose not to disclose drop rates then they won't see their games published on the likes of the Xbox One, Nintendo Switch and PlayStation 4 (or next-gen consoles), which would mean huge losses in revenue.

It's also encouraging to see the three gaming titans take a stance on the controversial loot box issue, as to date there's been a lack of leadership.

What the big three have to say

What do each of the gaming titans have to say about the new initiative? In response to a request for comment by TechRadar, a Microsoft spokesperson told us:

“We believe in transparency with customers and providing them information for making their purchase decisions. This is why by 2020 all new apps or games offering 'loot boxes' or other mechanisms on Microsoft platforms that provide randomized virtual items for purchase must disclose to customers, prior to purchase, the odds of receiving each item. In addition, we’re proud to offer robust family settings that offer further control over in-game purchasing.”

Sony's response to TechRadar echoed that of Microsoft. "Sony Interactive Entertainment aims to ensure PlayStation users have access to information and tools, such as parental wallet controls, that will help them make informed decisions about in-game purchasing," it said. "We support industry efforts to disclose the probability of obtaining randomized virtual items, known as loot boxes, and are committed to providing consumers with this information for all games we produce and publish."

While Nintendo has not yet replied to TechRadar's request for comment, the House of Mario issued a statement to Eurogamer stating: "At Nintendo, ensuring that our customers can make informed choices when they play our games is very important. As part of our ongoing efforts in this area, Nintendo will require disclosure of drop rates in Nintendo Switch games that offer randomized virtual items for purchase, such as loot boxes. This requirement will apply to all new games and includes updates to current games that add loot boxes through in-game purchases.

"We also offer tools like our Nintendo Switch Parental Controls mobile app, which empowers parents to choose what works for their family, including managing in-game purchases and setting playtime limits."

What does it mean for future games?

It's worth nothing that 2020 is when we're expecting the PS5 and Xbox Project Scarlett, so it's potentially easier for Sony and Microsoft to gate-keep the games being published on their next-gen consoles as they're essentially working with a clean slate.

Will current games be affected?

This is currently hard to say. The ESA stated that the disclosure initiative will "apply to all new games and updates to games that add such in-game purchases". But it doesn't specify what will happen with regards to games already published, such as Overwatch and Star Wars Battlefront 2. Will publishers have to disclose drop rates for these games?

When it comes to Microsoft, the company's statement specifically mentions "new apps or games", and Nintendo's statement echoes this. This would suggest that current games on these platforms, which include loot boxes, will not be required to disclose loot box drop rates.

Sony, however, doesn't specify "new" in its statement. TechRadar has followed up with the companies to seek clarification on whether this need for disclosure will be implemented in games already on their consoles.

But there are possible loopholes...

Here's where we have some concerns – this initiative doesn't necessarily mean that we'll definitely start seeing the probability of loot box drops being disclosed. Similar attempts in other countries to curb the loot box issue resulted in publishers just becoming more savvy about finding loopholes.

Back in 2011, Gacha mechanics began to appear in Japanese free-to-play mobile games. Simply put, Gacha is the root of the loot box mechanics. Based on those capsule machines you find in supermarkets, Gacha sees you putting money into something and receiving a random prize. Sound familiar?

The problem with Gacha is it became  Kompu (or complete) Gacha. This encourages players to complete a collection in order to win a grand prize. So while you may like the prize you got, the game encourages you to keep investing money in hopes that you'll get lots of small prizes that will equate to one big prize (although the probability of getting this big prize was low). It's like being rewarded for completing a sticker book, but much darker.

When the Japanese government worked out that that Gacha was encouraging gambling (particularly in children), Japan's Consumer Affairs Agency ruled the mechanic as illegal in 2012. No more Gacha. Well, almost.

A trade body was set up by mobile developers that hoped to implement self-regulation before government legislation came in. Much like the ESA, this trade body encouraged publishers to disclose drop rates and probabilities. However, the publishers found a way around this and the body fell apart.

But how do you get around this type of legislation? A similar attempt to curb loot boxes in China showcases exactly how this can be done without airtight legislation.

In 2017, the Chinese government ruled that publishers must "promptly publicly announce information about the name, property, content, quantity, and draw/forge probability of all virtual items and services". In addition, publishers could not directly sell "lottery tickets" such as loot boxes.

Here's where the loophole became apparent. Blizzard China, instead of selling loot boxes in games like Overwatch, instead started to sell in-game currency for real money. The kicker being that by buying the currency, you got a free loot box. Essentially this meant that players aren't actually buying the loot boxes, but the currency instead – you just happen to get a loot box for free. The publishers also didn't have to share the drop rate for those loot boxes, because they weren't technically selling them, so no laws were being broken.

Our worry is that the same issue could happen with this new initiative, with publishers finding new ways to sell loot boxes without ever having the disclose drop rates. For this new initiative to work, Nintendo, Sony and Microsoft will need to ensure that their policy is completely watertight, with no wiggle room that would allow determined publishers to get around the disclosure requirement.