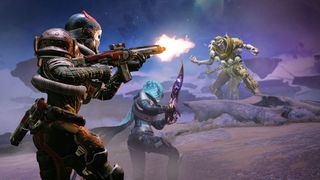 A few weeks ago when the AMD Ryzen 9 3900X and Ryzen 7 3700X launched, an issue showed up where you couldn't play Destiny 2 on the new chips. However, those dark days are over, as you can finally play the game again, thanks to a beta driver update.

In a blog post titled "Let's Talk Clocks, Voltages and Destiny 2", AMD lays out some of the issues users have been facing with the 3rd Gen Ryzen chips. For instance, there are some changes to the way AMD Ryzen 3000 processors will report voltages, clock speeds and temperatures in order to make the CPU behavior easier to understand from a surface level.

This is all delivered through a new chipset driver, version 1.07.29, which also features a workaround to get Destiny 2 players back in the game.

This issue with Destiny 2 became apparent right when the new processors hit the street. The game would not launch, and would instead sit in the background using up a negligible amount of CPU and memory resources. We installed this chipset driver on our own machine, and we can confirm it works.

We should mention that the workaround for the Destiny 2 issue here is only a beta solution, and could potentially have some side effects down the road. For instance, some slowdowns have been reported, according to a post from Anandtech.

However, in the same AMD blog post, Team Red says more permanent BIOS updates are in the works, and should be made available via motherboard manufacturers as soon as they're stable – a process that may take a couple weeks.

We said it back when the AMD Ryzen 3000 chips first started showing issues with Destiny 2, and we'll reiterate it again here: PC hardware launches always have some growing pains to get over. Still, it would have been nice to see this driver update launch much earlier – it's not a great feeling to jump on a $499 (£499, AU$789) Ryzen 9 3900X and not be able to play one of the biggest PC games on the market.

Still, in the face of the supply issues faced by high-end Ryzen processors, there are likely a lot of people waiting to pick up one of these chips anyways. By the time that these chips are more widely available we're sure the BIOS updates will be available for download.

If you picked up a Ryzen 3rd Generation processor early, however, you may as well download this driver, especially if you're trying to play some Destiny 2, especially as it gets ready for its free to play launch later this year.