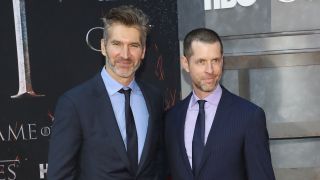 The duo behind Game of Thrones, David Benioff and D. B. Weiss, have signed a nine-figure deal with Netflix to exclusively write, direct, and develop new TV series and films for the streaming platform.

According to Deadline, Benioff and Weiss were being courted by six different studios, with Netflix beating its biggest rivals, Apple, Disney, Amazon, HBO, and Comcast to win the Game of Thrones creators.

The news will likely be a huge blow to HBO, where Benioff and Weiss spent nearly ten years crafting the trail-blazing fantasy show based on the novels of George R. R. Martin, reaching unprecedented levels of popularity.

However, since Game of Thrones came to a jaw-dropping end in May, it's been revealed that a Game of Thrones prequel, called Bloodmoon, is coming to our screens in 2020 – via HBO. So, the studio won't be saying goodbye to the franchise, even if the creators are heading on out.

For Netflix, the deal represents a huge win in the face of mounting competition from platforms like Disney Plus, Apple TV Plus, and Amazon Prime Video.

"They are a creative force and have delighted audiences worldwide with their epic storytelling. We can’t wait to see what their imaginations will bring to our members.”

It may be while before we see the fruits of this deal, which cost Netflix $200 million according to The Hollywood Reporter. After all, Benioff and Weiss are working on one of the next Star Wars trilogies, as well as an adaptation of prison-break story Dirty White Boys for Fox/Disney.

For their part, the Game of Thrones creators are excited to start work with Netflix, telling Deadline that, "Netflix has built something astounding and unprecedented, and we’re honored they invited us to join them.”

Here's hoping they can recreate the magic formula that made Game of Thrones a cultural phenomenon – if they can pull it off, they could just blow Netflix's competition out the water.