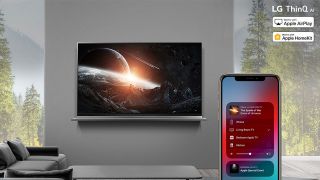 Are you a lucky owner of one of LG's 2019 ThinQ AI televisions? Then you'll get a welcome surprise in the coming days. The South Korean tech giant is rolling out Apple AirPlay 2 and Homekit support for its latest and greatest sets.

Coming to the newest LG OLED TVs, NanoCell TVs and UHD TVs with ThinQ AI capabilities in the coming days and weeks, the firmware update will let TV owners stream content from their iPhone, iPad or Mac straight to their TV sets using AirPlay 2.

Homekit support will allow owners of the TVs to integrate them into their Apple-powered smart home device line-up too. They'll be able to control basic functions such as power, volume and source controls from the Home app, with the TVs also compatible with "scene" functions that let the TV's features be trigged in conjunction with other smart home devices.

The main draw here likely will be that AirPlay 2 support. Apple's soon-to-transform iTunes store has a growing library of Dolby Vision content, which is supported by many of LGs most recent TVs.

Aside from the Netflix app, access to Dolby Vision content can otherwise be quite limited, with 4K Blu-ray players and discs being one of the few other ways to take advantage of the format.

LG's firmware update will be a welcome one, but it's not quite as seamless an integration as that of Samsung, which has this year acquired a built-in iTunes app for its smart interface, letting viewers buy shows and movies from iTunes directly from their TVs.