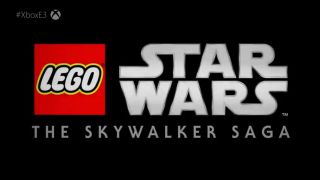 Star Wars fans are already getting a big name game in the form of Star Wars Jedi: The Fallen Order. But, for anyone that wants to relive all the adventures from Episode I to Episode IX, there may be only one game to combine them all. Lego Star Wars: The Skywalker Saga was just announced at E3 2019 during Microsoft's keynote presentation.

The new Lego Star Wars game will launch in 2020 after the ninth Star Wars movie concludes the nine-movie saga. It's coming to Xbox One and Windows PC, and it promises plainly to collect all nine films into one new game.

Naturally, the new game will include fan favorite characters from the franchise, with the trailer showing Darth Maul, Obi Wan, Darth Vader, Luke Skywalker, Kylo Ren, Rey, and the beloved droids R2-D2 and BB-8. There will undoubtedly be many more characters playable in the game as well, if past games serve as an example.

Previous Lego Star Wars games have covered much of the Star Wars Saga to-date, with the original trilogy, prequel trilogy, and even some of the latest trilogy covered. But, the new game may offer more than just some new episodes sprinkled on top of a remaster of the older games.

It's been more than 15 years since the Lego Star Wars video game franchise popped up to offer gamers a lighthearted and family-friendly version of the Star Wars story to play in game form.

While Star Wars Jedi: The Fallen Order is set to offer gamers a darker spin on the Star Wars universe, especially with a hero that acts a lot like a Sith, Lego Star Wars: The Skywalker Saga will be a game anyone can play, and is sure to feature the same goofy Lego combat and unique puzzle solving that has featured in the franchise so far.